Compiling Autumn begins as Discordance Axis return from their Japanese tour in support of second album Jouhou. Guitarist Rob Marton had abruptly quit the band before the tour, precipitating a two-year hiatus that nearly derailed the band permanently. Itching to grind, drummer Dave Witte managed to corral and reconcile Marton with vocalist Jon Chang, but the working dynamic in the band had shifted in the intervening time. As they prepared to record The Inalienable Dreamless, Discordance Axis had to develop a new working relationship between the three members that would ultimately make the album what it was. 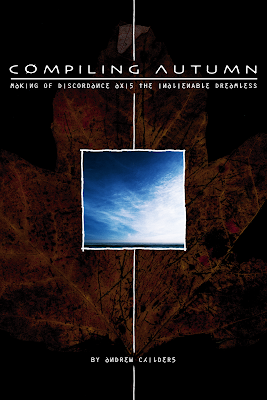 The Inalienable Dreamless is the sound of three strong personalities — the uncompromising visionary, the quiet technician, the speed demon —pulling together for a common goal in ways Discordance Axis had not been able to achieve previously. In many ways, it’s the sound of a band truly becoming a united force for the first time.
Where previously “Sgt. Chang” had been the band’s taskmaster and arbiter, deciding how the songs should go, dictating the lyrical and artistic direction and handling their releases – often without any input from his bandmates – The Inalienable Dreamless represents the fullest expression of Marton and Witte’s musical vision for the band. For the guitarist and drummer, it was no longer “Jon Chang’s Discordance Axis.”
“The earlier stuff, when we first started Discordance Axis, it was Jon Chang’s Discordance Axis," Marton said. "We never had a problem with that. It was his project. He kind of directed the whole thing. We were cool with that. We were there to have fun. But at some point it took over.”
Marton and Witte's new confidence meant Chang no longer dictated song structures or arrangement via spliced together bits of tapes from rehearsals. For much of Discordance Axis’ existence, Chang would direct the band’s sound by chopping up cassette recordings of rehearsals, piecing together riffs until he had songs that satisfied his criteria. As Witte and Marton grew as a musical unit, Chang was willing to relinquish some of the control, confident his bandmates had bought into the vision he had for what The Inalienable Dreamless would ultimately be.
“When we started the band it was my drive and my money and my contacts and everything was me pushing that thing forward,” Chang said. “When Rob said it was my project, he was right. It was literally me ordering things. It was me saying, ‘I demand this. We need to play this fast. We need to have this structure.’ And being really tyrannical about it, honestly. I did that because I had a vision of what we could be. We weren’t going to get there unless we went through a lot of things to be there. By the time Jouhou was done, I felt we were there. Whatever was going to come next, I trusted the guys to understand it and accept the vision. It was a common goal of everybody to make music like this. I pushed everybody in Discordance and it was one of the reasons it was a stressful band. That stuff hasn’t changed.”
The Inalienable Dreamless, Chang said, demonstrated a band pushing for and achieving that desperate need for perfection.
“After we wrote that record I felt like I was a different person,” he said. “It really was what I was trying to get with for a lot of years.”
The songs that would become The Inalienable Dreamless were hashed out by Marton, who had been writing throughout the band’s hiatus, and Witte during weekend rehearsals. The two musicians would refine the songs for two or three hours before Chang joined them for the final hour of practice to offer his thoughts.
“I think he let us create more and there wasn’t any splicing," Marton said. "There was ‘maybe we could lengthen this part and maybe put this part before this part’ instead of just him splicing a tape. The whole process was different. That sort of thing just really wasn’t necessary at that point. There was a bit of ‘I’m going to do what I think sounds good’ and it’s going make it or not. Before we were writing fast, we were having fun, but it was more of a ‘Jon will like this, so let’s do this.’ We wanted to write grind. We wanted to be fast. We wanted to be in your face. We were trying to find out how to do it.”

Posted by Andrew Childers at 7:55 PM

Congratulations! You are the man and a half. Incredibly psyched for this. Saw Gridlink & Dephosphorus writing about it on Facebook today and ordered a copy instantaneously.

Very cool and amazing. Will order this soon, does it matter where I order from?

Congrats, and thank you as well.

Thanks so much for doing this. I've always wanted to read proper interviews with Rob. I love his guitar but he seems to have been lost in time. Ordered it already.

chaos, i know. rob was the only one i'd never interviewed before. he's a really interesting guy, very quiet, very thoughtful. it's easy to see how he might get lost behind guys like witte and chang who are more gregarious. that's why i made sure to give rob the last word in the story, and it's a doozy if he follows through.

i really do hope you guys enjoy it and don't feel ripped off when you see how short it is. it really is just a novella/short story length. we tried to get some other bonus materials together to pad it out and make sure you got your money's worth, but the printer just wasn't equipped meet jon's vision.

btw, working with jon probably provided me the greatest understanding for what rob and dave went through in dxax. ha.

Dude, if we felt ripped off by short, sharp shocks we wouldn't be here.

I ordered a copy.

In fact, to use the oft-abused comparison: I bought the 33 1/3 book about "Reign in Blood." It was short. It was awesome. This, I am betting, is no different.