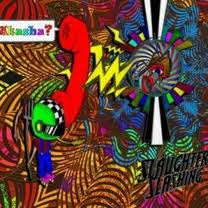 Slaughter SlashingAkasha?Guilty Parade
You could spend half an hour listening to Akasha? or you could just randomly twirl your radio tuner and get the same effect much quicker. Quebecois noisers Slaughter Slashing seem to conflate randomness with originality over eight songs that sacrifice niceties like coherence or listener enjoyment in pursuit of their every-genre-at-once intentions. I can't imagine Slaughter Slashing's target audience, but I'm pretty sure either the band or their fans will be on some heavy-grade prescription mood medication.
There are flashes of traditional metal bordering on grind lurking underneath Slaughter Slashing's Mr. Bungle-oid, everything-but-the-synthesized-kitchen-sink self indulgence. However, knowing my audience, that won't be nearly enough to hold your attention once the intrusive horns and other stylistic detritus start getting heaped on top. Rather than being content at being really good at one thing, Slaughter Slashing instead dabble halfheartedly in half a dozen. There are flashes that they know what they're about, such as the thundering, moody horn opening of "Bastian's Challenge," but 48 seconds into a 3:22 song it becomes a bloated, sagging mass of competing styles as blastbeats and bad jazz war for supremacy. The cool Creation is Crucifixion guitars of "Tommy Goes to Memphis (The Chronicles Part 1)," Akasha?'s first true song, get buried mercilessly under more flatulent horns.
And that's, ultimately, Akasha?'s undoing because as soon as you find one element you can latch on to, it gets obliterated by funk bass, twitchy electronics or horn lines stolen from Kenny G's yard sale. It's one novelty piled on top of another. Nothing gets integrated. Nothing coheres. And every time I listened to the album, it just became worse and more distracting. Akasha may be Sanskrit for aether, but I think Slaughter Slashing are just blowing smoke.
[Full disclosure: Slaughter Slashing sent me a review copy.]

Posted by Andrew Childers at 7:42 AM

Sounds like bad case of "YOUR AREN'T NAKED CITY!!!'

Ha! I think I'll grab this. I am in the mood for some lack of orientation and whateverness. Thanks for the review. Oh, and happy new year!

Oh man Ryan, I was just thinking of Naked City too. I just watched Funny Games for the first time and went all nerdy when I realized Naked City was playing

Andrew, is this the "meanest" review you've ever written? I didn't think you had it in you to use "nothing coheres."

if this qualifies as mean the world has gone soft.

which funny games did you see? i love the original but i've never seen the remake. but i understand hanneke pretty much remade his own film but in english. i don't know if it's any good.

I meant mean for you, as you've said numerous times you don't like being harsh.

I saw the remake, and eys, from what I understand it's a shot for shot remake. It was okay, not the biggest fan of home invasion movies; you've seen one you've kinda seen them all.

the original is pretty awesome for how it plays with audience expectations and breaks the fourth walls. but i love all of hanneke's films.

I'd really like to see his version of the Castle. I've become quite a big Kafka fan and I've heard it's good in its own way.

B-, Would do buidness with.

Al-slow, I've only seen the remake of Funny Games, but I thought it was pretty excellent. Forth wall interaction, and false ending intact. + Tim Roth.

Haneke is great. I think I'll look into his pre-"Funny games" films, IMDB mentions at least three which I haven't checked out.

Talking about Austrian directors, let me recommend Workingman's Death by Michael Glawogger (http://www.imdb.com/title/tt0478331/), which is one of the best documentaries I have ever seen.

This band's fucking sick live, their cd are cool but you really have to see 'em live.

By the way, they no more have a saxophone player