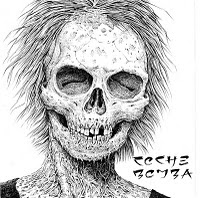 Coche BombaVectores de la MuerteRevulsion
Whatever evolutionary detour hardcore has taken throughout its existence, polyglot French punks Coche Bomba were happy to come along for the ride. Their discography record, collecting all of the band's output from 1995 through 1997, is an explosion of screaming, fastcore-to-grindcore beats, mic-passing choruses, the occasional whoa-oh-oh ("TRBNG") and even some halfassed reggae ("Le Sangre de Christo") just for good measure. These audio automotive explosives even reach back deep into punk's history when it was still recognizably anchored in swinging rock 'n' roll ("La Patria Es") and Ramones-style buzzsaw ("Tout de Suite").
That's a lot of different elements coming through Coche Bomba's corpus over 45 songs recorded over a three year period, and, ultimately, those elements are notable for how they accent the band's fairly standard Heresy-core. So don't expect them to explode your notions of hardcore/proto-grind despite their admonition to take these 45 songs and "annoy people//play loud." I'd be lying if I didn't say a million other bands were playing this exact same style, and Coche Bomba sit comfortably in the middle of the pack.
However, Revulsion did a nice job putting this package together, which features artwork like They Live glasses gone horribly wrong or a photo essay on Neo Tokyo after Akira came back to town. It's a nice cartoonish post-apocalyptic vibe when so many of their contemporaries are still ripping off Discharge's nuclear test and war zone style. So overall it's a cool wrapping around a fairly average band, but Coche Bomba can scratch that hardcore itch if you come across a copy somewhere.

Posted by Andrew Childers at 8:09 PM

People sleep on how good Akira is. This band sounded pretty good until you came out and said they're mediocre.

mediocre might be a step too far. i prefer average. there's no shame in being average if it's a good, honest effort.