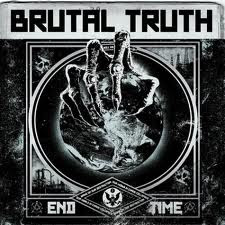 Brutal TruthEnd TimeRelapse
The Official Brutal Truth Album Reviewers' Guide (TM), a cheat sheet for lazy fucks like me, lists plenty of adjectives I can mindlessly bleat out for any new Brutal Truth album: innovative, unconventional, challenging, idiosyncratic, unorthodox. One you're not likely to see too often is formulaic, but that may be the most apt for End Time.
Formulaic is not inherently a bad thing, but we should at least acknowledge when the template is being followed and End Time certainly feels very familiar. Like Evolution Through Revolution before it, it's an amalgam of everything that made Need to Control and Sounds of the Animal Kingdom click, just distilled and smooshed together. You start with your lead-soled album opener "Malice" (see also: "Collapse"), blast a bit before you get a midpoint noisefucker in "Warm Embrace of Poverty" (recommended for fans of the first half of "Blue World," "Iron Lung" and "Semi Automatic Carnation"), grind a bit more and close it out with not one but two more doomed out farewells "Drink Up" and the superfluous, overly long "Control Room" (familiar to connoisseurs of "Prey," "Crawlspace" and "Grind Fidelity").
While that may sound negative initially, Brutal Truth rise above their self-imposed constraints to deliver what is easily the best sounding album of their career, regardless of era and lineup. End Time is all gnarled whorls and canines cracking gristle, powered by Erik Burke's dynamic Lethargian riffing style, which may be more engaging than Gurn's (there, I said it). He brings all new dynamics and shadings to Brutal Truth, fractal pools rather than jagged edges. And when the band does blast their way through comfort food grinders "All Work and No Play," "20 Bag" or "Addicted" it's with the assurance of veterans who don't have time to fuck around with half assed efforts.
Overall, I think I really enjoy End Time, but it would be nice to bust out those familiar adjectives again. Maybe next album if we all survive the end times.

Posted by Andrew Childers at 8:31 PM

When I saw them live they were great for 30 or so minutes, then Scott Hull told them they could play longer and it got just plain boring. I think that sums up this band's career.

I pretty much agree with you, Andrew. The album is truly killer, basically a rougher/meaner version of the last one.

The Brutal Truth we know today started with NTC. Everything after that was built upon it. ECDER was kind of left in the cold. Yes, it was very derivative of early Napalm Death but it was very extreme and enjoyable. Nothing scratches that pure grindcore itch quite like it does.

I'd love to see them go all the way back to Extreme and then build upon that. Thus creating a new, alternate timeline (ala Star Trek) where they have plenty of room to progress in a different direction. Or, they could just choose to rehash that over and over rather than rehashing SOTAK over and over.

what always interested me is that extreme conditions, need and animal kingdom/kill trend all sounded like they could have been recorded by different bands. BT pretty mcuh reinvented themselves each time out. evolution and end time sort of sound like what you'd expect BT to sound like. i guess i just miss that variety.