Blast(beat) from the Past: Bloody Phoenix 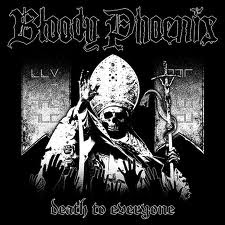 Bloody PhoenixDeath to Everyone625 Thrash2010
A spunky epigeneticist looking for an inside track on next year's Nobel Prize could throw the competition a curveball by sequencing drummer Michael Rarubin's DNA. Cuz I'm pretty sure dude is toting an extra arm tucked somewhere on his body or some other drumming-related mutation. That's the only reasonable explanation I can see for a guy who can roll a snare drum and smash a cymbal at the same time.
And Death to Everyone, Bloody Phoenix's second album (which eluded me all through 2010) is Rarubin's time to shine as he dominates songs like "No Conscience," which makes the case that maybe the dude's name should pop up in casual conversation more often when you're bandying around the best drummers in grindcore.
Not that the rest of the quartet is phoning it in. Two decades into a career that started with Excruciating Terror, I was floored to see Jerry Flores mix up the deck by stirring in bits of Neurosis, d-beat, Today is the Day and even some Killing Joke to his repertoire. The confluence makes this probably the strongest album in his unfuckwithable career. "Mast of Deception" is practically uplifting for all of its violence as it twines its way up an escalator guitar riff akin to Napalm Death's "When All is Said and Done."
Quivering vocal cord delivery system Aaron Ramos gets his Steve Austin on with the closing, eponymous song as he rants about the death of god with a single-mindedness you'd expect from one of Today is the Day's more violent revenge tracks.
This may have slipped through my fingers last year, but it's never too late to pay Bloody Phoenix their proper respect.

Posted by Andrew Childers at 8:03 PM

Labels: 625 Thrash, blastbeat from the past, bloody phoenix, death to everyone, grindcore, united states

Interesting fact: Michael has a damaged hand- meaning for the snare element of his blastbeat he holds the stick in a unique way: betwixt index and ring finger.
Maybe that lends a speedy edge?

i had no clue. that's awesome. i'm gonna have to troll youtube and see if there's any videos of. thanks for passing that along.

You can see it handily illustrated (by me) here:

thanks for that. that's pretty interesting. i wonder if it influences his playing in other ways.

I'm not sure TBH, but it is interesting to a point and certainly hasn't impeded him in any way.
The whole band has a wonderful kind of battle-damaged and hardened vibe.

herp derp. i missed it. i'll admit it.

this album totally rules. i also missed it in 2010 but i've probably listened to it more than any grind album this last year.