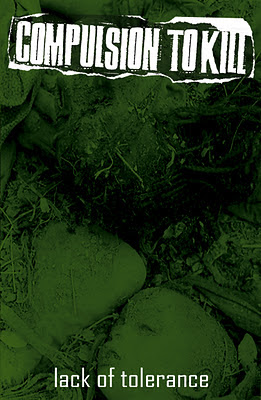 Compulsion to KillLack of ToleranceRevulsion
I found myself fighting Lack of Tolerance's production, straining against the murk because what I could pick out from Compulsion to Kill gave me heart palpitations. The production, courtesy of the band, ably captures that raw, live in the rehearsal room feeling, but it leaves very little texture and definition. It's unfortunate that the snare drum, in particular, sounds like a wood block because this is the calling card of an upcoming percussive badass. The speed and precision at play are goddamned astounding.
Compulsion to Kill's self-styled "peninsular grind violence" features ex-members of the late Malaysian grinders Torture Incident. Like that prior band, Compulsion to Kill specialize in straightforward grind beatings without recourse to subtly or nuance. I think; again, it's hard to pick out pieces of riffs when they all blur together into unremitting buzzsawing noise on their latest cassette. But that's also part of Lack of Tolerance's charm. The songs bleed into each other with barely a pause between to draw a breath. It's just a constant barrage of energetic noise poking and prodding at you. When they rise above the noise, Compulsion to Kill do pull some pretty nifty tricks, like the pitch-perfect Scum-style dun Dun DUN, dun Dun DUN riff that punctuates "Corporate Slayer."
This racket may not compel you to kill, but it will get your ass up off the couch and moving.

Posted by Andrew Childers at 8:16 PM

wow- this totally rips...never would have found it without your write-up. thanks!