G&P Review: Beyond Terror Beyond Grace 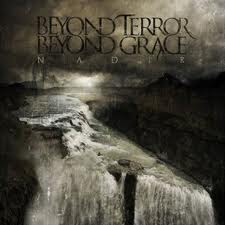 Beyond Terror Beyond GraceNadirWillowtip
Beyond Terror Beyond Grace have moved far beyond simple grindcore with Nadir, a scalding wall of volcanic gases and suffocating clouds of gray ash.
The Australians once slotted neatly next to Maruta and Crowpath, but with Nadir they have abandoned any pretense at concision and driving blastbeats to experiment with girth, texture and tempo. Now they sound like Ulcerate songs reinterpreted by Circle of Dead Children with a rime of blackened frost. Eschewing the wonted grindcore brevity, the album is chock-a-bloc with nine minute death metal overtures that look beyond how many beats can be crammed into a minute. The ghost haunted lead off "Dusk" allots plenty of space for its atmospheric middle passage, which bifurcates the blastbeat opening and its screaming conclusion. The song imparts a sense of claustrophobia that coats the album like a greasy film.
That song lays out a template that a bulk of the album will follow. Nine minute bangers "Requiem for the Grey" and "Throatless Sirens" follow, riding the same churning swells and crests. Not that Nadir is a one trick gray-painted pony. The abbreviated title track is a concise instrumental that revels in melody bolstered by barely heard samples.
It's rather boggling to realize this the same band that gave us the pig-headed brawl of Extinction/Salvation just five short years ago. This doesn't sound like the same band at all (and it's not because the band slotted in a new singer and guitarist in 2010). Nadir may not be Beyond Terror Beyond Grace's zenith, but it shows a band waxing into their perihelion.
[Full disclosure: Willowtip provided me with a download.]

Posted by Andrew Childers at 9:17 PM

I know I'm gonna get peed on by some folks, but:

This reminds me of "End of Nothing" by Rune...except I like listening to it. Rune's album sounded sort of thin when they got up to blast speed. I respect what they did, but it just didn't click with me (and I tried).

This, however, is tits to my ears.

i'll resist the urge to micturate, but i guess i can see that. you gotta be in the right headspace for rune to click.