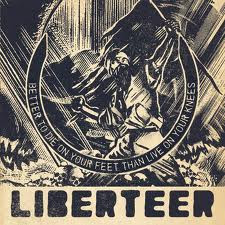 LiberteerBetter to Die on Your Feet Than Live on Your KneesRelapse
There's a spectre haunting grindcore -- the spectre of revolutionary fervor. All the powers of Old Grindcore have entered into a holy alliance to exorcise this spectre: tradition and inertia, blastbeats and punk riffs, a cowering fear of banjos and flutes.
Yes, banjos.
In grindcore.
From the Red Badge of Courage-approved banjos and flutes opening straight through the star spangled fireworks conclusion, Liberteer is out to incite a political uprising among the blastbeaten-down populace. Matt Widener (aka Liberteer) has previously flirted with a stateless notion of patriotism in his short-lived prior band Citizen, but with Liberteer he has cast off the last vestiges of king and country and is rabble rousing for the ubiquitous fellowship of humanity.
To that end, Widener has sculpted an operatic sweep of a grindcore album, an ambitious monument to music replete with uplifting themes and recurring motifs that point to its generation as a single, cohesive musical movement. This is an ambitious bit of grinding and it's not going to yield itself easily to casual listeners who may be turned off my swelling synth symphonies and unconventional instrumentation. When it does grind, Liberteer twists Terrorizer into something positive and uplifting versus scathing and downtrodden. "Rise Like Lions After Slumber" is particularly triumphant, and Widener lays out his platform on "99 to 1" when he screams the he wants "to be happy goddamn it."
The revolution, however, does stumble a bit out the gate. For one there's that mouthful title, Better to Live on Your Feet Than Die on Your Knees, which has been permanently denuded of any cache from constant repetition by every wannabe revolutionary from Tea Partiers demanding the federal government keep its mitts off their Medicare straight through that kid in the mall-bought Che Guevara shirt spouting half-understood Chomskyisms. There's also the melting layer of gouda that is the full on power metal bombast of "Sweat for Blood," which will likely be an obstacle to some in Liberteer's target demographic. Also, Widener may want you to stop bitching and start a revolution, but his vocals are monotone and just don't have the urgency to drive your ass to the barricades. In the hands... err mouth of a more skilled orator, Liberteer may have provided the "I am Spartacus!" cheer necessary to drive the masses from their complacency.
For all of that, the ambition and vision of Liberteer cannot be dismissed lightly. You may not jibe with Widener's vision for revolutionary grindcore, but I guarantee you've not heard anything like this before. Grinders of the world unite! You have nothing to lose but your shackles and a world to gain!

Posted by Andrew Childers at 7:30 PM

Labels: Better to Die on Your Feet Than Live on Your Knees, grindocre, liberteer, relapse, reviews, united states

While I couldn't get into this as much as I wished I could, he seems like such a nice/smart guy, especially since he's writing an existentialist novel. Also, he gets points for being a member of Cretin and the fact that Marissa Martinez is his best friend. This Pitchfork interview with him is a surprisingly great read:

he does some like a cool guy. but i get the feeling this will be a love/hate kind of album. my feelings about it are still kind of mixed but i really respect his ambition.

best grind record of the year