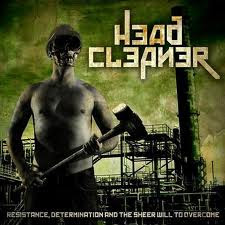 Head CleanerResistance, Determination and the Sheer Will to OvercomeClean Head Productions
What you get out of Resistance, Determination and the Sheer Will to Overcome, Greek death-laden grinders Head Cleaner's third release will largely live or die on how much you enjoy Napalm Death post-Spitfire Records. The quartet, featuring personnel from Homo Iratus and Disembowel, have that same death-crust vibe the English institution have pioneered since they split from Earache. Vocalist Jim "Mitch" Evgenidis has a convincing enough Barney roar that he could probably slide into Napalm Death's lineup unnoticed in a pinch.
From the EP's Soviet-chic fonts and propaganda-style art, Head Cleaner are rousing the same rabble Liberteer is trying to incite to revolutionary fervor against their monied masters. Where Matt Widener enlisted a drum and fife corps to hearken back to America's hardscrabble founding, Head Cleaner hit hard with grind intensity and tactical deployment of pig pen death metal a la Cattle Decapitation on songs like "The Chain," which leans more grind than death. And you know I can't help but smile at a song entitled "Crime and Punishment."
So after six tidy songs of serviceable deathy-grindy-nasty, it was really disappointing to see Head Cleaner go and shit the bed by committing the sin of the final song with the tedious "Departures-Arrivals." At nine minutes, the track is a meandering, pointless stylistic jump. It's a mess of fx-heavy vocals, thudding industrial beats and aimless guitar droning. The endless repetition adds nothing of substance. After the previous buildup, "Departures-Arrivals" forces this revolution to end with a whimper and not with a bang.
[Full disclosure: Head Cleaner sent me a review copy.]

Posted by Andrew Childers at 7:23 PM

well if no one's going to say something I will.

That art work's atrocious; enough so for me to write this band off.


p.s. what's going on with your blues? they're pulling a vintage Sharks choke.

That artwork is genuinely awful, but I was already turned off by the fact that it sounds like post-FEtO Napalm Death. Also, my father's going to so crushed that someone took his dream band name; since back in mid-90s VHS days he's thought "Head Cleaner" was the most clever band name ever.

haha. i guess i could see that.

my blues, they break my heart. but backes has looked gassed for a month, halak and pieterangelo are injured, steen hasn't looked the same since his concussion and shakkenkirk suddenly looks 22. but before this series the core of the team had a whopping 4 games of playoff experience so i think this whole run is a good learning experience for them.

I think its a really solid release.Music matters most not the artwork...