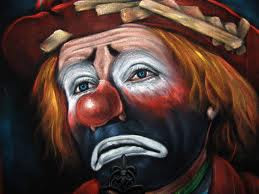 There was a period in the mid- to late-'90s/early-'00s where you couldn't hit up a show without tripping over Moonspell (them and fucking Shadows Fall). They seemingly opened for everyone. I'm too lazy to actually go back and check, but I seem to recall them kicking off shows for Samael, Amorphis, In Flames and Opeth in the span of about two years. Perhaps it's sheer bluntforce repetition, but I have a soft spot in my heart for the Portuguese doomsters (particularly their more industrial-tinged efforts) and every couple years or so I'll break out the few Moonspell albums I have stashed in my closet.
That said, I do not like mixing up my gothic boo-hooing with my death metal and grindcore. Some things just aren't right. But from time to time otherwise sensible punks and metallions who should know better decided to go all black nail polish on us. Here are a couple of the more egregious examples. Keep in mind only one of these bands is actually supposed to sound like this.

Opium of the Masses


Is there some sort of Poe's Law for goth videos? Because I'm pretty sure if you weren't already familiar with Moonspell you'd be pretty sure that's a parody. Nope. Straight serious stuff, right there. Not my favorite Moonspell song, but it sets up the horrors that are about to come next.

Resistant Culture already have a great gimmick working. They seamlessly stitch together bits of punk, crust, grind and indigenous music into an instantly recognizable, unique whole. They even boasted Jesse Pintado among their membership; that's pretty fucking solid, right there. But then on second album All One Struggle they suddenly got all Moonspell on us with sixth track "Runaway." I know it's supposed to actually be a song about, ya know, running way, but baritone crooning about the pleasures of the night just feels one precariously short step away from a Stephenie Meyer novel. I'm sure none of us wants to go there.

I Feel Your Pain

Vader is absolutely my favorite death metal band, but what the fuck just raped my ears? Sigh, yes at the end of their second album, De Produndis, the Polish institution for some inexplicable reason decided to tack on a cover of Depeche Mode's "I Feel You" as a bonus track. C'mon it's Depeche Mode! I don't know what's worse, that a great occult death metal band would cover Depeche Mode without the world exploding in some sort of musical matter-antimatter collision or Peter's unforgivably bad attempt at goth vocals. We will never speak of this again.
Posted by Andrew Childers at 7:33 PM

i will not confess my love for depeche mode (pre-1992 exclusively of course) in a public forum.

thats the song that got me into depeche mode :(

I have a jumper with patches of depeche mode, bad brains and wormrot sewn on. same jumper. all together. these bands/genre should NEVER be mixed in audio form because that happens

Just came across the blog trawling reading up on bands, just letting you know it's getting bookmarked..

first time i saw Moonspell was in 1995 when they were the frilly shirted odd band out on a Morbid Angel/ Immortal tour.