The Young Turks: Sakatat Mark the End of an Era

"It's fitting, it's right. Anatolia has always been the cradle of civilizations. New consciousnesses were born here. The Europeans have always looked down on us; they used to call us the Sick Man of Europe, but I tell you, it's Europe that is the Sick Man. We have wisdoms from thousands of years of civilizations and empires and religions, but they never listened to us because they invented the Enlightenment and the Renaissance and capitalism and democracy and technology, and those are the monologues of the twenty-first century. Maybe they'll realise that the future is going to be a dialogue. Maybe they'll realise that ideas can come from the Islamic world -- new ideas, ideas the world has never seen before, completely revolutionary ways of thinking about what it means to be human." 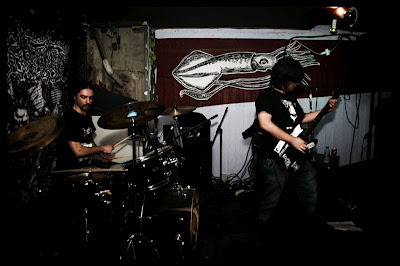 Ian McDonald's novel The Dervish House places Turkey at the center of the mid-21st Century energy and technology revolution. Turkey becomes the key linkage between the abundant fossil fuel resources of the Middle East and Russia and the power-hungry markets of Old Europe. McDonald's Turkey is also the growing center of the booming nanotech revolution, ensuring its prominence for decades to come, marking it as a rising economic and cultural juggernaut to define the decades to come.
We've got a ways to go before that vision is realized, but Sakatat are making the argument for Turkey's prominence as the powerhouse nexus between the tradition of continental European grind and the rising vitality of the Asian upstarts. Sakatat will commemorate the waning of old grindcore and the rise of new cultural pathways this summer with their first full length, Bir Devrin Sonu (That's End Of An Era for all you anglophones) courtesy of Bringer Of Gore (the LP) and Everydayhate (the CD version).
Sakatat built their reputation with a series of exceptional EPs and splits, honing their signature brand high octane grind, but the Ankara trio spent more time sculpting a total listening experience for Bir Devrin Sonu, vocalist Semih O. said.
"We’ve been gathering ideas and new tunes for the album during last two to three years so it is safe to say that we had the image of what would eventually become our full-length already," Semih said. "Being obsessed with making our records sound like a single-cut rather than bunch of short and fast tunes lined up after each other, recording a longer-length release has actually become quite a challenge."
The ferocity that defined Sakatat's past efforts was a matter of necessity because the band has never had the time or resources to camp out in a studio and contemplate their collective grindcore navel. While Sakatat were allotted more studio time than your average Bela Tarr film when it came time to record Bir Devrin Sonu, Semih said the savagery hasn't suffered because of the added comfort.
"This record and the recording session differ from the previous ones in so many ways: firstly we’ve spent quite a lot of them tightening this record so it is safe to say it is the fiercest recording we’ve ever done," he boasts. "Secondly, considering the length of the recording, this time we had more than three hours in the studio for the first time ever, which enabled us to work on the details. Lyrically, it is still straight and to the point with no metaphors whatsoever. However, this time we’ve covered a couple of new issues including the recent state of the so-called DIY scene. So, I would like to think that we ended up recording the album that would represent the sound, style and the attitude that we had always aimed for." 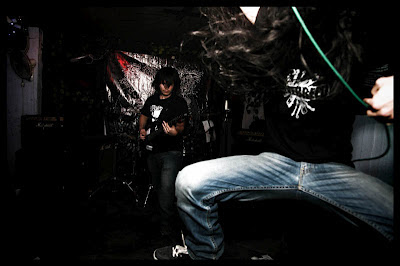 Sakatat have won me over to their cause even though I don't understand word one of what Semih is screaming. The band's commitment to DIY punk ethics also extends to singing exclusively in their native Turkish, to better address the issues they feel most personally. Though English has become the default language of the international metal community, Sakatat have made their Turkish roots and uniquely Turkish politics an integral part of the band's identity.
"I'd like to think singing in our native language is a big part of what we stand for," Semih said. "Grindcore or hardcore/punk in general is supposed to be anti-capitalist, so how would it make any sense to sing in the Yankee language? I have a lot of respect for bands singing in their own language which, to me, is a strong statement, itself. On the other hand, that shouldn’t necessarily mean you need to sing in your own language to be 'political enough.' If we have lost any attention solely because our name sounds 'weird' or people are too lazy to check out the translations to figure out what the lyrics are about, then this is a risk that we are willing to take."
Birleşmiş Milletler, Bölünmüş Halklar (United Nations, Divided Peoples) 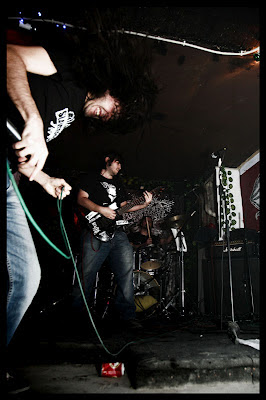 For the last several years I've become convinced that the vital heart of grindcore has shifted away from Europe and North America. Complacent First World punks seem to have lost that genuine sense of outrage and anger that keeps grind relevant. Instead, they're being lapped by up and coming corners of the globe like South America and South East Asia where memories of genuine political and cultural repression are vividly fresh. Standing at the cultural crossroads of Europe and Asia, Sakatat seem uniquely poised to reap the benefits of grindcore's past and promising future. (If you can name Turkish grind bands other than Sakatat and Ketum, you're doing better than me. Semih does recommend Burial Invocation, Godslaying Hellblast, Engulfed and "old-timers" Cenotaph.)
But my thesis may be flawed, Semih says. Rather than complex notions of shifting cultural balance, he suggests it's as simple as firing up your browser window.
"In my opinion, it has a little to do with anything else than the fact internet has helped people who were too lazy to go to the post office reach those scenes," Semih said. "I think the international DIY grindcore/metal/punk scene has always been there if you knew how to find it. If one’s main source of new bands are basement shows in their neighbourhood or features in multinational car company-sponsored magazines, then nobody should be surprised if he/she misses a whole lot of great bands and ideas that are out there. In our case, oppression in Turkey has come to a point that requires a lot more than playing grindcore for the same 50 people over and over again to overcome the urge to outrage."
Saktat will do all they can to incite that outrage all across Europe this summer as they hit the tour routes and festival circuit in support of Bir Devrin Sonu.
"Well, now that we finally recorded a longer-player, we would like to do as much touring as possible," Semih said. "However, although there are talks of other tours in the future, with so much uncertainty regarding the future of our personal lives, we are unable to announce anything at this point besides the already booked one-month tour around Europe in July 2012, which includes Play Fast Or Don't Festival and Obscene Extreme Festival in addition to about 20 other gigs in Germany, Poland, Czech Republic, Slovakia, Hungary, Italy, Slovenia, Croatia and Austria. The tour dates and details regarding the album will be announced on our web-site within a few weeks: www.sakatatgrindcore.com."

Posted by Andrew Childers at 6:26 PM

Burial Invocation are awesome, but in no way at all remotely grindcore. They're old school death metal much in the same kind of mould as Funebrarum and Grave Ritual.

Great interview though! Both intelligent and informative.

Great read, really like these guys (both on a musical and personal level) and happy to hear a full length is in the works.

Turkey's an odd country, when I visited I didn't find it too warm and surprisingly more fundamental than I thought it would be. Hopefully they usher in a wave of hc/extreme metal to the southern Europe/middle east area.

Hahaha, love the post title. Cannot wait for a Sakatat full-length, either.

I know/got to know them on a personal level and let me tell you this one thing. Sakatat is in no position to preach to the choir about the DIY scene. They have never put out their own vinyl, never recorded anything themselves in a basement to the point where they could put it out, and they're not old enough to have experienced anything other than what the internet has offered us thus far. Semih in particular is a manipulative, lying scumbag who does nothing but say the right words and wear the right clothes. Their name means "offal" in Turkish, and frankly, I really can't see how that relates to DIY/political/hardcore punk ethics at all. Being the business-educated, two-faced, backstabbing, moneygrabbing wanker he is; I'm sure he'll find a way to bullshit his way around it. Much like any shapeshifting con artist would. Don't let yourself be fooled by what people say, or by the music they play; because if there's one thing I've learned by connecting to people within the hardcore community over the years, it's that we have very, very little in common besides a partial overlap in musical taste. The Turkish scene? Please, based on derivations from bands established in Europe in the US, I really don't see how this will bring change or innovation to something that's oversaturated already. Finally, I want to add that always remember to think about the following statement when you hear people preaching to the choir: hollow barrels sound the loudest. All experiences I've shared with them on a personal level dismissed any form of practicing what they stand for, if there ever was a good one, I'm having serious doubts as to whether they exist solely to help boost their asses into renown.