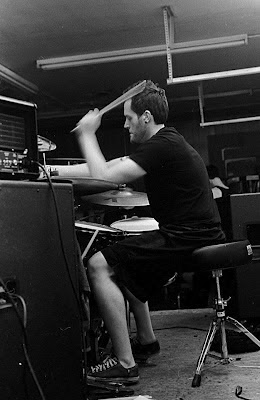 Every great hero has a signature weakness, something to help ground them and humanize them in fans' minds. It makes them relatable. Superman has kryptonite. Dustin Penner has delicious pancakes. For North Carolina bulheaded grinders Priapus, it's drummer Kevin Hedgecock's herniated spine. The painful injury has slowed the trio but with the drummer on the mend, the band will storm the stage for a string of live dates this month and is planning to hit the studio in August.
"I just had another injection in my spine this past week; yep, that was fun," Hedgecock said. "This whole ordeal is holding us back a little bit and it’s pretty aggravating. I/we can’t practice as often as we would like to. I’m used to practicing on my own 5-6 days a week, and I have to take it day by day. I can’t push it because I may set myself back. I still have another couple of months of dealing with this nonsense, but we’re going to remain as active as possible."

But like any good hero's journey, that spinal setback is just a speedbump on Priapus' inevitable march to grindcore glory. A key early step on the hero's pathway is meeting with a supernatural agent who sets our raw protagonist on his way. In the musical context, that would likely be where a deep pocketed label swooped in to foist Priapus on the grind-starved masses.
But here is where the metaphor breaks down. Guitarist Jeremy Shaffer said the band is "definitely not opposed to working with anyone - mainly because I’d love to have some shitty record of ours on a label that has released killer albums that I’ve been listening to for years." However, Priapus also doesn't necessarily feel the need to go the label route to bring their racket to the people in this socially networked world, largely courtesy of their Bandcamp page.
"To be honest, we haven’t really pursued any labels - 10 years ago, we’d probably be a lot more aggressive about it. This is the first band I’ve been in where we haven’t considered label support to be a major goal," Shaffer said. "But yeah, a big reason is that we really don’t need a label right now. Our expenses are fairly low: we record here in town for a suspiciously low price, thanks to Kris at Solo Sound Studios being an awesome dude and the wondrous advances in soulless digital recording. We don’t tour because we’re all office drones during the day (and telling your boss that you 'have to take off a few days to play basements with punx' sounds really dumb when you’re wearing slacks). The computer tubes have been great in terms of getting our shit out there, so we don’t have to rely on physical distribution (and all the expenses it entails) to annoy people in far away places. It’s been really cool to be able to do this for cheap and without having to worry about bugging labels to help us out...definitely wouldn’t have been possible until pretty recently." 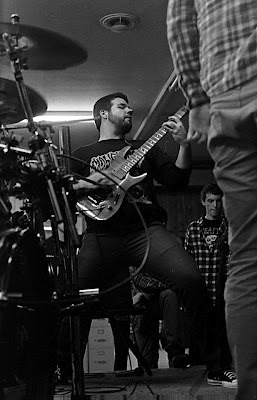 Priapus seemingly came out of nowhere in 2011, exploding out of the gate swinging a prime-time ready brew of power violence murk and grindcore grit with Air Loom.
And yes, Priapus kinda sound like Maruta.
The Maruta comparisons are pervasive and inevitable. (But to be fair to the chattering classes, the band has not exactly been shy about ripping off better bands, either.)
"It's usually quite surprising for us if we see a review that doesn't mention Maruta," Shaffer said. "Of course, I totally understand the comparison - we didn't set out to sound that similar to them, but I think we have a lot of commonalities with them, in terms of influences. From a guitar perspective, I've always loved the weirder, dissonant kind of stuff you hear in bands like Gorguts, Wormed, Discordance Axis, Malignancy, and Assuck. That background comes through in the riffs I write for Priapus, and I know that the Maruta dudes are super into that kind of stuff, so I'm not surprised that the two bands sound so similar. Priapus is, of course, much worse. We just can't compete with their sultry brown skin and Latin passion."
But our pasty white heroes in their oh-so-stylish Dockers live up to the Maruta comparison thanks to that signature grisly guitar tone -- that swampy, syrupy snarl that helps define the Priapus sound. The secret sauce is a mixture of death metal and neglected technique, Shaffer said.
"Some of it might come from the fact that when Kevin and I first started jamming, we were both in death metal bands - he was in Malebolgia, I was in Atrocious Abnormality - that were both playing fairly technical, clean-sounding brutal DM. Subconsciously, I think, we wanted to do something different - something looser, more aggressive, and less precise, so the low-end murkiness of Priapus is probably a response to what we were doing at the time. Also, I’m a very sloppy player, so that probably helps nail our signature 'can’t play guitar' sound," he said. "I don’t think we really hit our stride until [vocalist] Jordan [Noe] joined. He had never been in a band before and had no fucking idea what he was doing, which we thought was awesome and is probably why his vocals sound so grumpy. I basically see the drums & guitars in our songs as structures to support the vocals - I think grindcore should make people get angry, and I don’t think we had that until we got Jordan on vocals."
Noe not only brought the anger, but he gave Priapus' songs some lyrical and intellectual heft as well. The initial inspiration for Air Loom came from the history of James Tilley Matthews, the first recorded case of paranoid schizophrenia. Matthews, committed to the infamous Bethlem hospital in London (source of the word bedlam), thought he was being tormented by a gang of spies zapping him with a giant ray gun called the Air Loom, as detailed in the book Illustrations of Madness.
"We thought that was sick and could also be a cool analogy for how mass media works these days," Noe said. "All of that is awesome, but unfortunately I got lazy and wrote hardly any lyrics based on that concept. The only song that ended up being about the Air Loom is ‘Where Is Everybody’, which was the last song we wrote for the EP, and I actually wrote the lyrics in our hotel room the morning we went to record vocals. The lyrics are either directly lifted from or are references to The Air Loom Gang, which is another book about JTM and the Air Loom. Everything else on the EP has song titles that reference Illustrations of Madness, but the lyrics are all based on real life shit."
While Noe may not have completed the concept album, his bandmates do credit him with one of the most important decisions when it came time to record Air Loom: scrapping Shaffer's pitch shifted low vocals.
"We recorded the whole EP and then listened to it at the end of the session and it sounded really silly, so I grumpily agreed to re-record all of the low vocals myself at the last minute," Noe said. "It sucked at the time because I was belligerently drunk and exhausted, but I’m glad we did it, otherwise the recording probably wouldn’t have seen the light of day."
"There are a lot of stupid things about Priapus, but the idea to do pitch shifted vocals is probably the most stupid," Shaffer said. 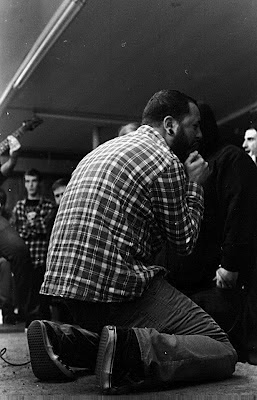 The final stage of the hero's journey finds our protagonist returned to his own domain, wiser for the experience and free to live out his life without the fear of death or failure.
With Hedgecock on the mend, Priapus are looking get back into full swing, booking a handful of shows as time, family and job commitments allow and making preparations to become the new lords of Splitsville.
"As far as shows we’ve got some shows coming up at the end of July and sporadically throughout the summer," Hedgecock said. "We’re aiming to go into the studio in early August to record 3-4 tracks for an upcoming split with InTheShit that I’m pretty stoked about."
After pairing with InTheShit, Priapus are talking about a series of splits and EPs over the next year that would do Agathocles proud.
"Yeah, once we are done with the Intheshit split, we’re going to keep working on new music and play the occasional local gig," Noe said. "We’ve talked about doing splits with The Communion (NY) and Hedorah (MI) -which are both great bands that everyone should aware themselves of - and then we’d also like to eventually put out a 7” of our own. With the time it takes us to write, that should take us well into next year. We’d also like to make a few long weekend treks up and down the East Coast if we can schedule it around work and family obligations. We’ll see!"
Until then, Priapus are content to have set off along the hero's path.
"Honestly, it’s just fucking cool that people dig listening to music that we think is fun to write and play," Shaffer. "We all love grindcore, so our original idea was just to get drunk, play fun riffs and shamelessly rip off Nasum. We still do all of those things, but now we rip off other bands too."

All photos courtesy of Ian Tuten
Posted by Andrew Childers at 7:28 PM

Excellent work; thanks for this. I've been blasting the shit out of Air Loom lately. I'd love to see Priapus swing up the coast and play an NYC show at some point.

I love G&P interviews, I love the reviews too, but the interviews are something completely else. Just a small error its Bethlem not Bethelm, having spent 10 years of my life living actually next door to it, some crazy shit happens there.

thanks alex. typo has been de-typoed.

Awesome interview! Glad to see the drummer is getting healthy again.

One of the absolute coolest bands this blog has introduced me to. Can't wait for more material.

Back tard
Jeremy and Jordan are members of the BBSSclub, they go to scummy mexican clubs :P