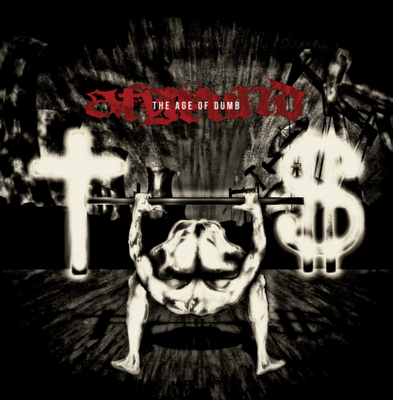 Afgrund
The Age of Dumb
Willowtip
Let's just dispense with the most glaring issue off the top: that title. Yes, for their third album and their first primarily in English, The Age of Dumb is the best Afgrund could come up with, apparently. It's terrible; let's just acknowledge that and move on because, title aside, The Age of Dumb doesn't give you much reason to otherwise question these Swedes' judgment. Simply put this is yet another really good grind album.
The guitars this time are kissed with a touch more of that classic Swedish death sound, but otherwise it's the same propulsive grind you've come to expect from their first two outings. Afgrund hurtle bodily forward, never stopping to catch a breath and (mercifully) not indulging in the halfassed stoner doom excursions that gummed up the middle of Vid Helvetets Grindar. "Repaint the Truth," in particular, is a nice example of the Swedish grind arts, a wound up run through a minefield of blastbeats and razor wire screaming.
At this point in their career, Afgrund have very comfortably mastered their style and sound, and that may be one niggling complaint about The Age of Dumb. Afgrund have not advanced so much as refined their sound over three albums. What you hear with them is pretty much what you get. But I think they're capable of more. Afgrund have given us a series of really good albums, but I believe they are one of those bands with a truly great album lurking in them if they just push themselves. The refining is nearing its completion. The metal is pure. It's time for Afgrund to start forging lasting weapons.
In the mean time, The Age of Dumb will keep them firmly ensconced on many an end of year best of list. Even if that title is just plain dumb.

[Full disclosure: Willowtip sent me a download.]
Posted by Andrew Childers at 7:19 PM

Labels: afgrund, grindcore, how swede it is, reviews, the age of dumb, willowtip

What is so terrible about that title? It fits the frontcover, which is genius!

That's for posting this, completely slipped my radar. I was surprised by how much their previous lp grew on me, especially for such a slick production. It helps that they have some great riffs, hope they're present on this one.

The name is worse than that album art... Not the band I'd expect it from.

I agree that the album art and album title are a bit off putting, exhibiting a sort of punk-philistine simplicity I have not expected of Afgrund, but perhaps I put too much on airs. Personally Afgrund's best release was Svarta Dagar although subsequent efforts are still personal favourites of mine, so I am very hopeful with this album.

i gotta side with strike/alex here. i thought the title/art were juvenile to the point of being offputting. afgrund are capable of much better. i am concerned about the same-iness that's seeping into their albums though.