They swept her on into the ballroom, where she was seized about the waist by a handsome young man in a Harris tweed coat and waltzed round and round, through the rustling, shuffling hush, under a great unlit chandelier. Each couple on the floor danced whatever was in the fellow's head: tango, two-step, bossa nova, slop. But how long, Oedpida thought, could it go on before collisions became a serious hindrance? There would have to be collisions. The only alternative was some unthinkable order of music, many rhythms, all keys at once, a choreography in which each couple meshed easy, predestined. Something they all heard with an extra sense atrophied in herself. She followed her partner's lead, limp in the young mute's clasp, waiting for the collisions to begin. But none came. She was danced for half an hour before, by mysterious consensus , everybody took a break, without having felt any touch but the touch of her partner. Jesus Arrabal would have called it an anarchist miracle. Oedipa, with no name for it, was only demoralized. She curtsied and fled. 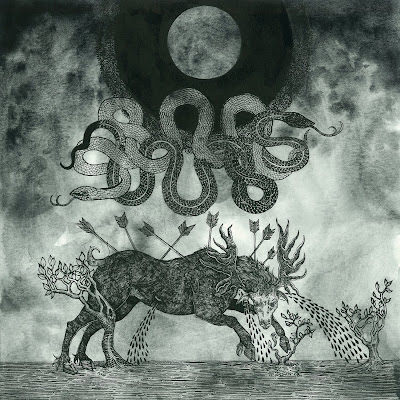 Robocop/DetroitDead Language, Foreign BodiesGrindcore Karaoke
A great split requires a synthesis of disparate musical visions, an unspoken simpatico that's difficult enough to achieve within the competing personalities of a single band, let alone multiple. But 2012 has proven to be a banner year for synergistic tag teams. Dephosphorus and Wake have already made productive musical congress and Priapus stepped out with Old Painless. Now Robocop and Detroit up the bar with one of the most balanced faceoffs you'll hear. This long awaited split finds both bands moving toward a common center. Robocop has cleaned up their sound while Detroit follow up Pusher with another handful of more impassioned songs.
The most intriguing transformation is Robocop, who have never sounded this clean and crystalline. It adds new shadings to a signature song like "Feminism Uber Alles," which gets reinterpreted as a largely instrumental tune with John Zorn-style sax wailing standing in for vocals. I think I miss the loud, violent sound of their past efforts where it sounded like the songs only held together by dint of an anarchist miracle, but nonetheless it's absolutely fascinating to hear the band through new ears. The cleaner production gives more prominence to all the subtleties at play, like the constant background hum that unsettles "Psychic Transferal." Otherwise, Robocop once again indulge in their wonted obsession with how the frighteningly permeable meat we call our bodies interface with the 21st Century.
Detroit's half meshes perfectly with their Pusher material (the song "Pusher" closes out their selections, and I wouldn't be surprised to hear these songs come from that same recording session). The guitars are reedy and needling, insistent and uncomfortable. It provides the perfect platform for the all in conviction of songs like "Day After Day," which captures and embodies the relentless march of time that must drag at and wear down the genuinely depressed. Elsewhere, the mournful, clean-toned dirge of the primarily instrumental "Into You" shows real maturity as it slides into a brief spat of distorted rage and ranting defiance.
Detroit and Robocop are not just two bands thrown together for the sake of mutual promotion. Rather, this is a great pairing of two modern power violence bands take similar routes to entirely different, but still complementary, destinations. This one is a must hear.

Posted by Andrew Childers at 7:38 PM

Robocop's ridiculously heavy sound does well when it's offset with moments of abstract noise and the singer's Locust like vocals. That midsection in "Room 641A" is the best part of this split hands down.

While it may not be as "fun" as II, I like this production and being able to hear it more cleanly.