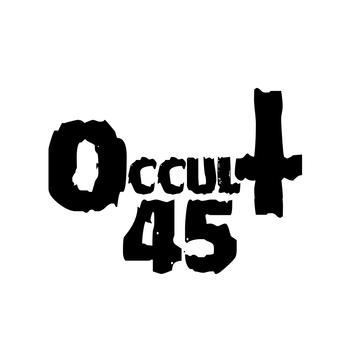 Occult 45
Grind Funk Railroad
Bandcamp
Were I the director of television marketing for young grind bands (and were that actually, like, ya know. a real thing), I would round up Billy Dee Williams for a series of commercials spoofing his Colt 45 ads to pimp Philly three piece Occult 45. Unfortunately, I think Lando's smooth-ass delivery would maybe overshadow Occult 45 because too much about Grind Funk Railroad reminds me of better bands. With only four songs in the offing, that's concerning.
First up, Occult 45 hit me with the same "I am a false prophet, god is a superstition" sample that thedowngoing already made their own (and which may need to be added to my list of verboten samples). Occult 45 rock a nice buzzy guitar tone, but they are no thedowngoing. The simplistic (in a good way) "Tehran Desert Vampire" has an almost Discharge hop about it, but again that pulls me away from Occult 45 and into the realm of someone else.
Even the title is a double whammy, naturally bringing to mind the ultimate American Band and also Total Fucking Destruction, who've already punched our tickets for the "Grind Freak Railroad." (But apparently lampooning better bands is Occult 45's things because their next demo is called Grind the Lightning).
I don't want to give the impression that there's anything inherently wrong with Occult 45. They do their thing well and four songs is barely enough to make sweeping statements about them as a band. I'm just waiting for them to find a voice. To be fair though, they are probably the first non-pornogrind band to start with a sample about the joys of eating pussy and asshole. I guess that's something to build off of.
Posted by Andrew Childers at 3:38 PM

their name is dumb, i'm that fickle that your great blurb still won't sway me into listening to them. Then again, Pizza Hi-Five are awesome.