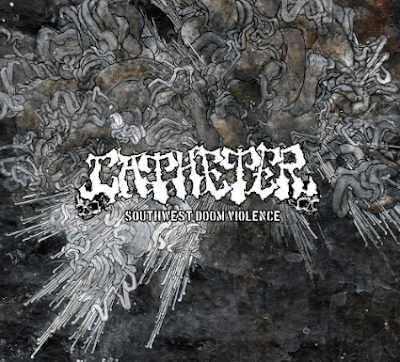 CatheterSouthwest Doom ViolenceSelfmadegod
Unlike forerunners/contemporaries Phobia, mile high grind trio Catheter have never given into the sheeny, shiny modern production impulse. Southwest Doom Violence, their first full length since 2005's Dimension 303, is a time capsule of that big, burly '90s grind sound, before everything became sleek and overcompressed.
There are still potholes and jagged edges to Catheter's sound that serve their appropriately titled album well. Grindcore, doom and power violence get frapped into 17 songs of dismal, gray misery laced with occasional crimson skeins of vein popping outrage. Perhaps the one nod to the 21st century is the fantastic snare drum sound, a nice, solid snap gets its moment to shine on "No Harvest," which briefly spotlights the percussion. With "Doom to Grind" Catheter also snag one of the greatest samples to ever kick off a grind tune.
Catheter are one of the few grind bands that know how to dig into a good down tempo tune without making it sound like a half-assed afterthought too (hence the "doom" in their Southwest Doom Violence). Part of their prowess is that they keep their dreary impulses in check rather than dragging the album to a drug stumble halt (though they do succumb to the five minute doom closer cliche). At their best, Catheter give us great songs like the 90 second "Can't Change Existence," which blasts in the front and then wiggles like a sidewinder on the way out. It's like a grindcore/doom mullet.
Overall, Southwest Doom Violence is a stubborn reminder of what grindcore used to sound like back in an era when its conventions were first being solidified.
[Full disclosure: SMG sent me a download.]

Posted by Andrew Childers at 6:05 PM

Nice, I'm glad Catheter's still making music! I think I'll have to get this one.

This is a pretty sweet record, and it makes great workout music (in part because of the whaledick heavy slow parts).

Honestly, though, I was initially disappointed that they used that Sunlight/Entombed guitar sound. I liked the sharper/drier/Slayerer sounding guitars they had on previous albums. Once I got used to that, I ended up enjoying what has to be one of the all-time HEAVIEST grind albums.

This is great. I saw them live with Laughing Dog, that was an amazing show.