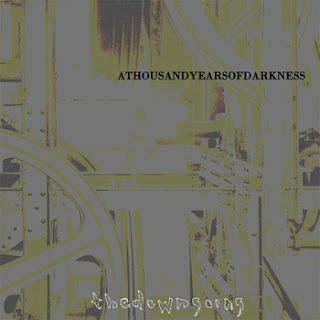 thedowngoing
ATHOUSANDYEARSOFDARKNESS
Bandcamp
We always boast about grind being wild and unpredictable music that thrives on chaos on spontaneity. But the shameful truth is grindcore is a highly formalized, very rigid--practically formulaic--music style. Too often grind albums fall into that comfortable lull of the familiar and predictable. Beats get blasted, larynx are stress tested and old punk riffs get sped up. You know what you're getting into in advance and plenty of bands are not ashamed to give you exactly what you expect.
And then there's thedowngoing.
The Australian duo have earned every worn out cliche like "brutal" and "overwhelming" and "unrelenting" that get far too casually tossed out by lazy ass reviewers (myself included). For their third album, ATHOUSANDYEARSOFDARKNESS, thedowngoing give lie to all of grindcore's posturing with a record that genuinely embodies the notions of chaos, aural violence and a predatory unpredictability. ATHOUSANDYEARSOFDARKNESS continues thedowngoing's single-minded pogrom against safety, sterility and comfort in grindcore with a noisy, frighteningly raw sound of incoherent screaming and musical instruments wielded as weapons.
The Australian dervishes may be a tad less frenzied than on their self-titled album, but that still puts them square in the center of the crawling chaos Nyarlathotep's domain. In 10 minutes (and even a single minute more would be overwhelming), thedowngoing put to shame most of their contemporaries and plenty of their forerunners with a continuous battery of sonic abrasions. When they do give you a five second breather between penultimate song "snakecharmer" and farewell "aching," it's just further cruelty, giving the victim long enough to process and prepare for the next torture.
ATHOUSANDYEARSOFDARKNESS forced me to really rethink what I say about albums and how I describe them to others. It's easy to break out my well thumbed thesaurus of metal-appropriate terms, but very few bands earn adjectives like "brutal" and "violent" and "unrelenting" the way this band does. There are only a handful of bands working right now that deserve to be mentioned in conjunction with that thedowngoing are bringing to the table.

[Full disclosure: the band sent me a review copy.]
Posted by Andrew Childers at 6:34 PM

Out of curiosity did you find this release more preferable to the untitled ep? (P.S the post title is missing the e)

i'd probably have to go with the self titled. it was just a hair more chaotic and that really pushed it over the edge.

True, although I find this latest endeavour to have a darker twist to it, that has really taken my fancy.