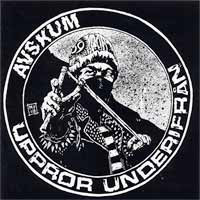 Avskum
Uppror Underifran
Prank
Given the state of my retirement account these days, I think Swedish punkers Avskum just may be on to something about the evils of that kapitalismens and masskonsumtions stuff. (Yes, I know I just used that 401(k) joke already, so fucking sue me.
In the halcyon days of the Obama era (i.e. before he actually assumes real power and is forced to compromise and make the tough choices that will inevitably abrade some of his sheen), I find it highly doubtful an army of disaffected punks will rise up in revolution and fight it out in the streets a la the Battle in Seattle. In fact, in the age of flash mobs, hactivism, Republicans suddently seeing the light of socialism and the world’s recent, universal hope-gasm, the very idea seems sort of anachronistic and downright quaint. Not that I’m blaming Avskum. The d-beat wielding Swedes plopped this Molotov cocktail of a disc in our laps a couple months before America woke up from its eight year hangover and suddenly remembered all those values we're supposed to embody. Uppror Underifran is high quality d-beat from a collection of veterans sharing a single focus and playing with a comfortable groove.
“Kapitalismens Yttersta” starts throwing bottles and sticks and riot cops right out of the gate, setting a pounding tempo that the rest of the album follows like a sled as songs are shouted out during a street by street running battle with the law. All of the usual suspects take a few well deserved truncheon swings to the noggin: patriarchy, bankers, political weasels and nationalist blowhards. Nothing you haven’t heard already.
The fact that its so backwards looking, rather than being a defect, is actually a mark in Uppror Underifran’s favor. This is the comfort food of d-beat, something that brings joy because of its unabashed simplicity. Avskum tidily package the nostalgia of different age when the battle lines were clearly drawn and everyone could strap on a black bandana and chant slogans outside of a G-7 conference with the belief that the world's evil could be slain called to the carpet if the mass of humanity would simply rise up, conveniently forgetting simple majorities in this country, at least, had voted for Reagan, Nixon and Dubya with a smile on their face. But that's a problem for another day. For now just enjoy your recurring fantasies of toppling the capitalist power structure.
Posted by Andrew Childers at 12:41 PM