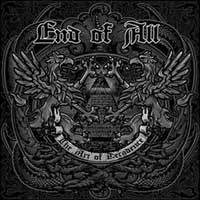 End of All
The Art of Decadence
Crimes Against Humanity
What better way to cap the end of all this sverige goodness the past two weeks than with End of All.
In a flash of (probably) unintended genius, End of All brilliantly summarized this whole Swedish d-beat shtick with the title of previous album Same Shit But Different.
Now, I loves me some Swedish punk as much as the next guy, but if you randomly grabbed a disc from my Scandinavian shelf of CDs and forced me to name the band at gunpoint, there’s about a 50/50 chance I’d end up with my gray matter decorating the wall. Not to be pejorative, but at its base, every band is just serving up the same shit but different and End of All, who turn out another enjoyable but workmanlike half hour of dun datting are no exception.
Astute heraldry geeks will likely guess these Swedish d-beaters’ lineage once they realize the griffons rampant gracing The Art of Decadence’s cover are the inverse of the wolves rampant Wolfpack employed for Allday Hell.
Featuring former members of the Wolfpack/Wolfbrigade collective, End of All play the same style but just lack that special something that help set them apart. The songs are solidly written and well played, the production is passable (though a tad flatter than Same Shit), which make End of All an enjoyable listen but nothing that deviates from the (wolf)pack of clamoring d-beat hordes.
The Art of Decadence lacks the oomph and searing, vaguely Gothenberg-ish guitar leads (think Live the Storm) that helped propel Same Shit and on the whole sounds more muted and uniform in both production and composition, making it an album that fades from memory moments after it ends. I’m hoping this is just a temporary setback for a band that has easily held its own against scene leaders like Skitsystem and Disfear in the past.
Posted by Andrew Childers at 6:42 PM

Labels: d-beat, end of all, hardcore, how swede it is, reviews, the art of decadence