Blast(beat) From the Past: Gore Beyond Necropsy 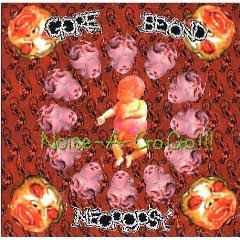 Gore Beyond Necropsy
Noise-A-Go-Go
Relapse
1998
Like John Waters (whose movies are repeatedly sampled) directing an Anal Cunt video in a sleazy Shinjuku train station bathroom, Gore Beyond Necropsy’s out of print Relapse effort is a total train wreck of perversion and malfeasance set to some of the shortest grind tunes this side of Agoraphobic Nosebleed.
Don’t be fooled by the medical oddities art work, these Nipponese bangers are not same lame ass gore/pr0n puked out by self-congratulatory morons around some of the worst music imaginable. Instead, GBN gleefully wallow in all things deliberately retarded, grotesque and scatological though 59 songs pumped out in less than half an hour with a concise, lo-fi attack. If you dig Japanese grind and wish CSSO were just a tad more straight forward, you either already scrupulously collect GBN albums or you have a major hole in your collection.
Given Relapse’s current status as one metal’s most aggressive major labels, it’s refreshing to remember Matt Jacobson et al used to be just one more upstart scrounging the globe for undiscovered gems. While this out of print effort may not quality as a bona fide lost classic, it’s a must for fans of Seth Putnam and J-grind. Hell, it’s one of the first CDs I stole … umm …. permanently borrowed when I was working radio in college.
If you don’t believe me, those mind-reading bastards at Cephalochromoscope beat me to the post (with downloadable goodness) on this one and pretty much said all you need to know. So head over there and give it a listen.
Posted by Andrew Childers at 7:15 PM

Labels: blastbeat from the past, gore beyond necropsy, grindcore, japan, noise-a-go-go, relapse

If Noise-A-Go-Go doesn't deserve a repress, nothing does. And hey, thanks for the mention and all.

Very cool, will check out. Thanks.