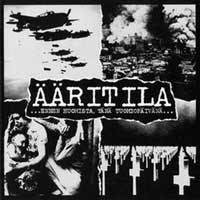 Aaritila
…Ennen Huomista, Tana Tuomiopaivana
Feral Ward
Pity the poor Finnish site moderator. Anglophones moderate obnoxious commenters through the art of disemvowelling, but that’s quite a task when your native tongue is largely consonant free.
The genius of disemvowelling is it allows a troll’s thoughts to still be parsed, albeit with effort. But say I were to disemvowel the title of Aaritila’s latest Finn-core assault, all you’d be left with is Nnn Hmst Tn Tmpvn by Rtl. Not really much to go by there.
Not that I’d want to disemvowel a d-beat outing this enjoyable. Featuring members of Totalitar and Riistetyt and with nary a band photo where somebody isn’t sporting a Discharge tee, that probably tells you all you need to know about Aaritila.
But in between all the d-beating off, Aaritila channel a swinging core of Stooges style rock and roll.
“Totalitaarinen Valvonta” may be an anthem to an uprising of the proletariat, but its solo could have been lifted from a dance friendly early Social Distortion LP while “Kuolleen Kukanmaa’s” low end will shake the foundations of oppressive capitalist oligarchies and and booties.
Aaritla no double hold sincere beliefs about the role of power structures in every day life, but clearly that doesn’t mean the music has to be dour. Not only will the revolution be televised, but it will have a beat and you’ll be able to dance to it. I give it an 85.
Posted by Andrew Childers at 6:45 PM