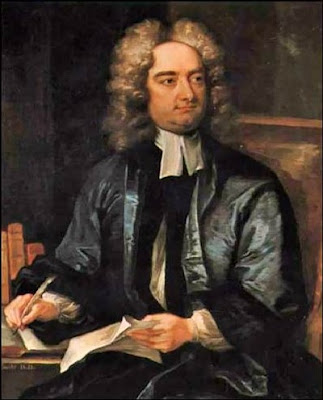 I think it’s pretty much a truism that Carcass fans go in for gory entertainment, but who knew the Catholics had the same perverse inclination? And who knew they beat Eli Roth to it by about 300 years?
While the Holy See today is more likely to be known for impeding medical progress, letting the little children cum unto them and deny its store of magic crackers to people who think what a stranger does with their blastocyst is none of the goddamned business.
But it turns out there was a time nearly three centuries earlier when Catholics – at lest one Irish priest – actually had a fairly morbid sense of humor. Carcass may have thought themselves witty for the baby-devouring shenanigans of Symphonies of Sickness banger “Embryonic Necropsy and Devourment,” but Irish priest Jonathan Swift had already been there and done that in his scathing 1729 “A Modest Proposal,” which suggests the destitute Irish eat their kids to stave off hunger and reduce their financial burdens.
“A child will make two dishes at an entertainment for friends; and when the family dines alone, the fore or hind quarter will make a reasonable dish, and seasoned with a little pepper or salt will be very good boiled on the fourth day, especially in winter.”
I’m already cruising Allrecipes.

Sprog – n. a child or a new military recruit.
Lochial – adj. of or relating to the liquid discharge following birth.
Caesetating – I found a reference to this word here, but I can’t glean any definition from it. So have at it.
Parturient – adj. In labor.
Piquance – adj. a spicy flavor.
Posted by Andrew Childers at 7:13 PM