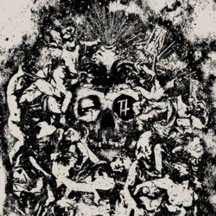 Trap Them
Seizures in Barren Praise
Deathwish
Trap Them’s episodic songwriting is a little like leafing through the diary of some emotionally shattered zombie apocalypse survivor. Just sub in fear, anxiety, misanthropy and Oedipal outrage for a crushing mob of shambling, necrotic brain munchers.
Days 19 through 31 on Trap Them’s third release finds our survivor no better off than before, if not a little worse, as vocalist Ryan McKinney shouts into the void over the riotous amalgam of Tragedy, Entombed and Converge his co-conspirators bang out beneath him. Fair warning, I’m about to coin a really horrific genre name, but Trap Them, right now, are the leading lights of the recent 'Tombedcore movement, Frankensteining Wolverine Blues’ booty shaking death ‘n’ roll to crusty, furious d-beat.
Kurt Ballou channels prime Sunlight Studios circa 1991 in his production work, swiping the fabled studio’s trademarked pitch black guitar tone and turning it into a blunt object to batter the listener into emotional submission without ever sacrificing subtlety or clarity.
While Seizures in Barren Praise largely expands on the palette Trap Them nearly perfected on last year’s Séance Prime, the band does stretch their limbs, exploring new moods on “Mission Convincers,” which swipes Grief’s junkie stumble for a seven minute body blow session to the Torso.
While I hope McKinney’s day to day life isn’t the psychological Walking Dead episode it appears on record, I hope he never manages to outrun the stumbling horrors that propel some of the finest hardcore being made today.
Posted by Andrew Childers at 7:32 PM

I guess I'm gonna be the first to comment on how I think I like Backstabbers Inc. more than Trap Them. BSI was just so good.