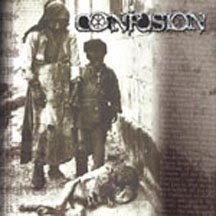 Confusion
Demos’lition
Obliteration
Roaring out of Medellin, Colombia, right about the time Pablo Escobar caught a bullet with his teeth, lo-fi/no-fi grindcore trio Confusion set down 60 second slabs of misery and poverty chronicling life in one of the most violent corners of the globe at the time.
Demos’lition, their discography-cum-demo round up, bulldozes through the songs chronologically, which may be daunting if you’re expecting niceties like clarity and the ability to recognize instruments. If you can soldier through the earliest material, which sounds like someone shouting from the next room over a wash of cymbals (if this were black metal it would be necro as all fuck and original copies would be selling for absurd prices on eBay), toward the better produced middle of Confusion’s compilation, you begin to hear what it was these Columbians were bringing to the table under all that recorded-on-a-boombox-with-low-batteries-in-a-garage murk.
“Ultra Violet Ray” is a Discordance Axis style take on the two second song that owes a debt to the many versions of “Dystopia” while “Dirty War” may be the only effective paring of grindcore and Gregorian chant in, like, ever.
While I dig the musical Napalm-isms, I’m kind of bummed by the rampant Napalm-isms on the lyrical front (and really, who pays attention to grind lyrics, so this is a small complaint). Coming from such a unique background compared to the largely American/European/Japanese axis of most grind, I was hoping Confusion would spit bile about issues more local. Instead, from what I can glean (lyrics not included), the band was a tad too comfortable to wear one more rut in the well trodden path of grind cliché (“Nazi Skin Shit,” “Ignorant and Proud,” etc.). But again, a small complaint.
If you prefer your noise on the less produced end of the scale, Confusion are an interesting tip toe through South America’s neglected grind offerings.
Posted by Andrew Childers at 9:12 PM