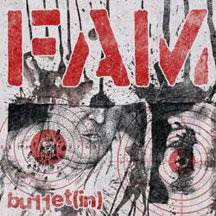 F.A.M.
Bullet(in)
Scrotum Jus
Despite what I hear about Tina Fey’s dead on Sara Palin, I haven’t wasted 90 minutes of my life being bored by Saturday Night Live since Mike Meyers and Dana Carvey were both on staff (which, in itself, dates me in ways almost as frightening as the amount of hair I find in my comb every morning). All that pointless prologue is merely my way of excusing myself should anybody think I’m trying to make some trendy-four-years-ago observation when I say, was that just a fucking cowbell I heard in the middle of “Driller,” an otherwise respectable grindcore tune from Poland’s F.A.M.?
It takes a lot to distinguish yourself in a musical scene as whose frontiers are as deliberately limited as grindcore. In a vain bid to somehow distinguish their unique strain of punk-meets-metal-in-a-basement noise from everyone else with the same idea, some bands simply rename the style, as though we wouldn’t notice. Agathocles pass off their Napalmisms as mincecore; Japan’s leading grind export, 324, dub their music darkness grind; and Kataklysm remain the sole purveyors of northern hyperblast. Furor Arma Ministrat, as they call themselves, bill their particular brand of blastbeat racket as “Panzer Grind” (an odd notion given Poland's 20th Century history with panzers). But it’s just grind and it will take more than a new nomenclature to separate F.A.M.’s love of pig squeal vocals and beer hall drum beats from the crowded hordes. Compounding the problem, there are occasional flashes of crafty songwriting that leave me salivating like Pavlov’s proverbial pup. The skipping riff that propels the latter half of “Tapping Nerves” is more catching than ebola at a Jack in the Box drive through window. When they click, as with their savage cover of The Exploited’s “Beat the Bastards,” F.A.M. begin to live up to their panzer grind tag.
If F.A.M. could trim the lard and double down their effort to write decent songs (lose the cowbell), I could be all over this. For now, it’ll land in my occasional listen pile.
Posted by Andrew Childers at 7:06 PM