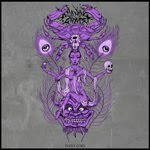 Burning Ghats
Fool’s Gold
Self Released
The burning ghats of Varanasi are sacred sites for Indian Hindus. The crematory steps along the holy banks of the Ganges are the final farewell for your immolated loved ones.
The Burning Ghats of Vancouver is a quartet coming correct with a four song EP of be-Siege-d hardcore and chug-a-lug eddies colliding with desperate yelps that fall just short of articulate.
With longer songs than many of their peers, often in the three minute range, Burning Ghats take the time to completely develop their ideas musically while being mindful of not overstaying their welcome. With songs like “Ceremoniously Fuck You,” the band shows its often most comfortable working a mid-gear crush while “Speaking+’s” rangey reach lopes from hardcore rush through stomps and drones. If Chile had deployed “Missing Person’s” subterranean burrow sooner, they probably could have pulled those trapped miners back up to the sunlight a few weeks earlier.
It's here for your “pay what you want” consideration courtesy of Bandcamp, which means you have no excuse for not giving it a listen and, if the mood strikes you, throwing a couple of bucks at a promising young band.
Posted by Andrew Childers at 7:11 PM

I love this new band camp, if only there was something to merge twitter, myspace and bandcamp for bands.

ha! i was just at the burning ghats in varanasi 3 days ago. what a timely review.