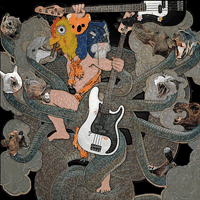 Comparative Anatomy
Mammalian
Mind Flare Media
Just when you thought Hatebeak and Caninus were enough to get PETA’s fair trade, animal product-free panties all bunched, Virginia’s Comparative Anatomy stitch together an entire album of experimental electronics from the tortured bleats of defenseless animals and abused machinery. Fair warning off the top: this is not grindcore. Instead, Comparative Anatomy wield a pastiche of funk bass, industrial drum machining and audio loops into a sometimes coherent ruckus all while sporting animal costumes that would make Attack of the Mad Axeman blush from shame.
Largely instrumental, the two manimal band lets the animal noises stand in the stead of vocals on songs that are looping and slowly mutating with repetition. It’s like listening to Swans’ Soundtracks for the Blind as remixed by an autistic kid with a Fisher Price See ‘n Say. Each song gets its own animal avatar guiding development of the noise. “Peter Rabbit the Great’s Carrot Phalanx” rings with martial horns, sending up military engagement in the tradition of the Marx Brothers’ Duck Soup. “Puppy Hatred” blends ’50s crooning with Red Harvest industrial glower in an intentionally jarring juxtaposition. Among the most involved and layered songs, “Swarm of Camels” manages to stitch together samples of Indian vocals and melodies, funk bass, industrial beats and cell phone ringtones into something that stops just short of unified.

When things don’t jell, like the screeching, monotonous “A Car Full of Seals in the Mall on the Day After Thanksgiving,” Comparative Anatomy begins to look less serious about their craft.
And that’s the crux. A lot of the compositions tend to be clever and can engage on an intellectual level, but I’m not getting any kind of visceral or emotional jolt from the songs. I’m left wondering how much further Comparative Anatomy can take a concept many (most?) people will write off as a one-note joke.

[Full disclosure: MindFlare sent me a review copy.]
Posted by Andrew Childers at 8:36 AM

Comparative Anatomy have a song on the Small Doses compilation CD, and I thought it was pretty cool. It definitely made me interested to check out more of their stuff.

Judging from the review, I'm not sure if I care, but "It’s like listening to Swans’ Soundtracks for the Blind as remixed by an autistic kid with a Fisher Price See ‘n Say." makes me sincerely wish I did.

It's a pretty good album overall. The noise type parts can get a bit overbearing, but they were apparently going for an annoying angle at the time since they played a bunch of shows with high-profile metal bands. The newer stuff is leagues better with way more complex arrangements, sample usage, and different instruments.