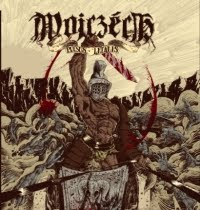 Wojczech
Pulsus Letalis
Selfmadegod
As an amateur epicurean with a budget, a lot of enticing delicacies have been denied me on the basis of cost. Chief among them would be the purported glories of Kobe (aka Wagyu) beef, famed for its exquisite marbling and excellent taste. The bastards on Iron Chef keep tempting me, but so far the opportunity to partake has eluded me.
And while that delectable morsel is beyond my current pocketbook’s reach, it does make a perfect metaphor for Germans Wojczech’s unexpected new album, Pulsus Letalis, which is beautifully marbled with lean grind muscle and veins of unctuous death metal substance. It’s just a shame it’s a bit of step back from their earlier work.
As to be expected since it's the band’s first full length since 2005’s Sedimente, there’s some rust that still needs to be worked off. Where that album was a gymnastics routine tied to a foundation of grind (bassist Andy Colosser moonlights in criminally underrated grind visionaries Who’s My Saviour), Pulsus Letalis plays it safer with a more familiar blend of death and grind. Wojczech have hunkered down to deliver a dozen songs (including Repulsion’s “Maggots in Your Coffin”) of bullish death grind that pits aggression over artistry. While it may tend to a tad generic lacking the band’s prior expansiveness, it does its job.
“Battlestar” swirls along on a delightful circular riff while the astrally projected “Leitkultur” hints at Wojczech’s former experimentalism as it slithers along like a glass serpent. The strongest aspect of the album, overall, is Stephan Gottwald’s perfectly on point drumming, highlighted by the thunderous “Steinzeit” or snare rolling “Izotope.”

Wojczech have always suffered from middling band syndrome, never finding that hook to vault them into wider consciousness, but by jettisoning the irregularities that made Sedimente stand out from the pack, they’ve made their job that much more difficult. On its own, Pulsus Letalis is a perfectly acceptable album, but compared to Sedimente, it just feels lacking.
Posted by Andrew Childers at 7:54 PM

I have Wojczech on a few splits, and tend to feel they don't offer anything really catching. Although I must check out Sedimente based on your recommendation.

time to break out the dunkel bier, my lederhosen, some bratwurst and check this band out:fuck i love germany

i'm more of a sauerbraten/jaegerschnitzel guy myself.

To be honest, I'm all about the kielbasa; but don't tell the germans that....

One thing is for sure, that cover art rules.

flesh - i'll saying nothing if you pass some of that kielbasa and some sauerkraut my way.

Checked their myspace to listen to those 4 songs they put up and i liked what i heard. Didn't strike me as a natural favourite, but i'll definitely search for this record to take a close listen.

I'll be checking out Sedimente sometime soon. I only know about the band through Who's My Saviour?, so I'm interested, fo sho.

I love that half of the comments on this review are about food rather than grind, which prompted me to have the incredibly nerdy idea that someone should do a series of posts where grindcore, punk and metal groups share their favorite recipes.

@DesiccatedVeins
Decibel or some magazine came out with a metal cookbook or something, dishes presented by your favorite washed up metalheads.

Ha! I know magazines have done it before; this would presumably be different because it, y'know, wouldn't suck.

It's pretty fucking cool, too. More adventurous than what I've heard of this one.

yeah that was my real source of disappointment. pulsus letalis is a perfectly acceptable death/grind album. but sedimente was so cool and diverse and bizarre.

Your streak is intact, my man.

I have spread the Who's My Saviour? love to others through a mixtape exchange on a forum I frequent, btw.

i wish to hell that band would record another album. what a great sleeper of a record.