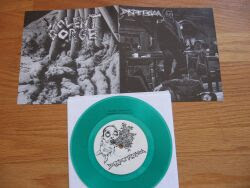 Dispepsiaa/Violent Gorge
Split
Bullshit Propaganda
I can’t remember where or when I read it, but several years ago I read a review that said two things can just ruin an album: the vocals or the snare because they’re ubiquitous throughout. That insight has stuck with me ever since. I won’t say Winnepeg’s Violent Gorge ruin their half of the split with their vocals, but they’re wrapped in enough layers of reverb to stay toasty through the harshest Manitoba winter. And because they’re shoved so far to fore, it detracts from what is otherwise a tidy little grindcore racket. Sounding like the first Black Sabbath record played by a horde of necro crust punks, Violent Gorge, musically, is a fairly satisfying experience. The clear ringleader is “Repulsive Apparatus,” which best exemplifies their frosted punk take on grind, but the croaking, echoing vocals just overwhelm the remaining songs. What the band lacks in recording chops, however, they make up for with a whole thesaurus full of song titles like “Labrynthine Plica Polonica” and “Mephitic Bromhidrosis.”
Flipside, Brazils’ Dispepsiaa just bring the noise. With roots tracing back to the semi-legendary Rot, the band expertly hits that sweet stride between lofi energy and perfect clarity. The guitars, in particularly, are raw and aggressive while also being amazingly clear. You can practically hear each string vibrate in isolation. Aside from a quick introductory flash of jazz to one of their six songs, Dispepsiaa best exemplify the Brazillian approach to grindcore: don’t look for innovation; just try to keep your teeth in your face as they work you over with a sphincter clenching ferocity.
Sadly, Dispepsiaa have called it a day, but their half of the split more than serves as a quality epitaph. Violent Gorge are more atmospheric than their grinding kindred, but they don’t yet know how to make that work to their advantage.

[Full disclosure: BS Propaganda sent me a review copy.]
Posted by Andrew Childers at 7:37 AM