I’ve (mostly) accepted the death of music as a physical medium. So I’ve made an uncomfortable peace with the idea that in the future my music collection will largely consist of a bunch of 1s and 0s on my hard drive (provided one can bear up under my unkind ministrations) and, if I’m really lucky, a jpeg to go with it.
Albums used to be much more than just a collection of music. One of my favorite early punk and metal moves was to have the picture of your record collection spread out on the floor like this: 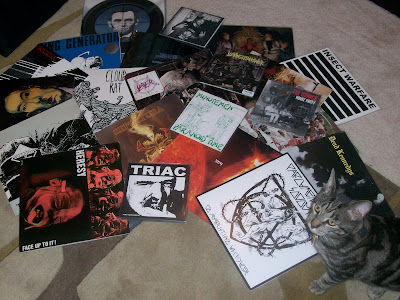 The common house cat is the most metal of all domestic animals. 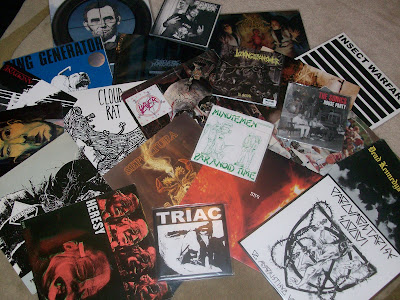 It was a great way to show off bands' influences, and for those of us playing along at home, those became instant albums to hunt down. It was an important way of finding new music.
In my life I’ve gone from vinyl to cassette to compact disc to the mp3. That’s just a change in delivery method; I can cope with that. I miss all the other stuff that comes with albums: lyric sheets, liner notes, thank you lists and assorted album art. If you were (just throwing out a hypothetical here) a military brat bouncing around the world who had trouble making friends and never clicked with any “scene” (totally not talking about anybody in particular…moving on) those things were vital ways of finding interesting new bands in an era before you could immediately pirate any album from the comfort of your search engine. This is probably nothing more than cranky old guy reminiscence though. The world changes; you change with it or get run over. But for all the ease digital delivery provides, you’ve gotta admit physical albums were a better way of showing off your collection than this: 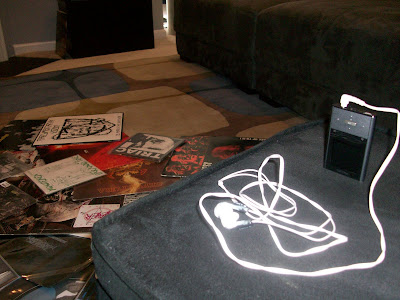 Posted by Andrew Childers at 8:37 PM

This is adding further steam to my argument that every grinder has a cat, literally every one I know. Ohh and Physical releases RIP.

Is that a fucking Zune?
Records I'm jealous of: 324, King Generator, CoDC and SEPULTURA.
I have tons and tons of 1s and 0s, but I love to collect and listen to records. I think I always will. The thrill of digging around in a store only to find something you would never expect to find a physical copy of because there were only 50 made. The rush.

I don't however, use dinky earbuds.

But yeah, I actually buy stuff in digital formats somewhat often now. It's somehow less fulfilling, granted, but it's something that needs to happen. No reason to waste plastic/paper/goatblood.

zune and sepultura and dead kennedeys and insect warfare ALL rule. cheers!

no wonder that this is my favorite grind-blog.

I just got that P.S. album a few weeks back. Oddly enough, considering the post, I bought it in digital format from their Bandcamp site.

Have you heard the new Psudoku stuff yet? Sounds wicked.

not a zune. sheesh. i'm not that old and lame. it's a phillips.

meanwhile, let's hear it for all my collector nerds.

and bill i got the new psudoku and it's coming in a few weeks. fascinating little cassette, that. i've been hitting up mollen for another interview too. so i may hold off so i can run those together.

Can't wait for that Psudoku write-up, man. That tape is too good.

P.S. - download that Vaccine demo from my blog. you won't regret it.

what is a zune?
i had a beeper once.

Physical releases for life.
People who prefer mp3 and laptop speakers (Mr Layzell) are cheating themselves out of most of the experience.
Also those of us who frequent actual gigs will always have the opportunity to buy directly from bands, I don't see that going anywhere soon.
If a band wants to cover expenses, they need to sell something... many of us resent having to become fashion designers instead of musicians :D

Thank god. My roommate just bought his second zune. I don't know how I can convince him that it won't kill him to at least use itunes (he has to organize and tag his faux tunes all the time).

If one of these existed, he'd get it: http://www.youtube.com/watch?v=opTfPmN0YEM

I used to use Creative Labs players, but they didn't have what I was looking for last time my old player broke. I think they had the best playback quality. I don't feel like fuckin' with itunes, so Zune for me.

I've never had any problems having to re-organize or re-tag anything, though.

i gotta side with bill on this one. i'm not rich enough/cool enough to be part of the cult of mac so i don't mess around with itunes either. i used to like macs a lot but the hoopla around the brand has gotten annoying.

My bias is probably just from the perspective of someone who does computer art and audio/video editing, and it really isn't worth it to attempt to do it on windows, although people will argue it can be done. I was never able to get anything close to decent recordings until I was forced to get a macbook in college. There's kind of a cult around them, but for media it's a lot easier/cheaper than buying audio externals that don't work so you have to spend time in the studio.

The m-audio device I recorded jigoku on I spent three years trying to work with my toshiba, not to mention the audio software I bought for it.