The convict knows he is a convict, an outcast, and he knows his place vis-à-vis his superior officer; but no brands, no fetters will ever be able to make him forget that he is a human being. And since he really is a human being, it is necessary to treat him as one. Merciful heavens! Human treatment may even render human a man in whom the image of God has long ago grown tarnished. It is these ‘unfortunates’ that must be treated in the most human fashion. This is their salvation and their joy.

Fyodor Dostoevsky
The House of the Dead
1860 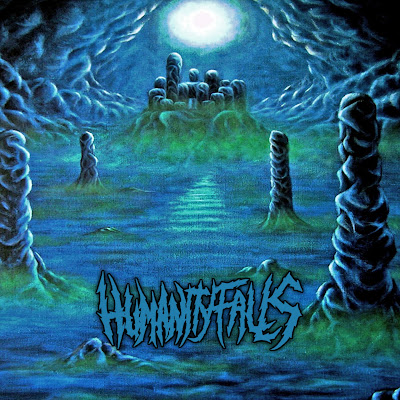 Humanity Falls
Ordaining the Apocalypse
The Path Less Traveled
It’s not often I’ll point you to a cover song as being indicative of a band’s progression, but the way New York grinding deathsters Humanity Falls tear through Discordance Axis’ “Pattern Blue” almost serves as a Rosetta Stone for the young band’s progress on their 2010 album Ordaining the Apocalypse.
On their demo, Humanity Falls were going through the gawky, adolescent stage of their musical development. All their ideas (and they must swing by the local Costco and buy them in bulk) just didn’t quite cohere into actual songs. Those same demo tracks have returned with a vengeance on Ordaining the Apocalypse. They’ve cut the fat, bulked up the muscle and are in prime game shape, lead by a guttural death roar that erupts from the toes. Everything is leaner and tighter. There’s barely an extraneous moment on the whole 10 song package.
There are scintillating bursts of brilliance as with “Denounced Manifestation,” which hares away from a blasting opener to explore shimmering galaxies of spiraling supernovae (though it occasionally wanders too far afield for the song’s own good). Though many of the songs bring the ugly brutality of Circle of Dead Children, on the whole, Ordaining the Apocalypse has a definite entropic direction. The songs move from tightly snarled death/grind bursts to increasingly unmoored arrays of sparkling starbusts that shine and hover just above and outside the song itself. It’s a trick that works best on songs like the title track, which eventually circles back to something resembling traditional song structure coherence.
While Ordaining the Apocalypse displays a decent amount of growth for a young band that’s starting to find its own voice, the production, unfortunately, it still rather demo-ish. A more robust, layered sound would have showcased the various elements of their meticulous music to better effect. But an effort like this should prove Humanity Falls are worthy of a bigger budget when they record their follow up. While I have no doubt the Path Less Traveled put out a quality package for Ordaining the Apocalypse (seriously, go read label honcho Sean’s series over at Invisible Oranges), the band said they’re also just fine with you going ahead and downloading it. Maybe that will inspire you to send a couple bucks their way.
[Full disclosure: the band sent me a download for review.]
Posted by Andrew Childers at 7:59 PM

Excellent work Mr. Childers. I'm a big fan of this band. They also slaughter live and are very nice dudes.

This is some pretty badass stuff. Agree that just a *tad* more clarity in the production couldn't hurt, but I do like the raw sound.

seems like it could be amazing but i think the production is suffocating the actual music. one to watch out for though.