I Want a New Drug: Drugs of Faith Go the Distance on Corroded 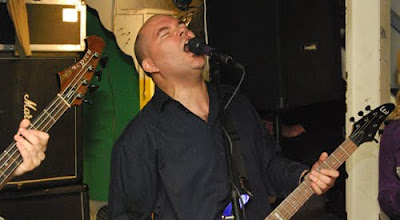 For all the high profile releases 2011 promises, the darkhorse that intrigued me the most was Drugs of Faith’s first foray into the realm of the full length on Corroded.
With an EP, a split, a demo and a This Comp Kills Fascists Vol. 2 stuffed and mounted on their collective trophy wall, the band is gracing us with their first long player. And for someone who has been such a vital grindcore institution for a decade and more, this is also the rare occasion when Richard Johnson has gotten a wide canvas for his music.
“As far as I can remember, I haven’t written for any release to achieve any sort of theme or mission statement besides writing in the confines of whatever genre it was,” Johnson said. “That certainly wasn’t a concern with Enemy Soil. I think we were the same as any other grindcore band in that we had to write enough songs to fill up whatever format we were going to record for. We did that with Corroded also. We wanted to have a 30-minute full-length, what I understand to be an industry standard. So we just kept writing until we had enough material. Our mini-album was 15 minutes long, and we needed to do something much longer than that. Now that I say all that, I have to admit there was some pressure to have a good fucking record. We made the point in the press release that Drugs of Faith has ‘finally’ completed a full-length, and that’s the right way to put it. People that have been following us are interested to see what we pull out of the bag for this kind of format, because we’ve not given anybody anything longer than 15 minutes since 2002, except for the LP version of the mini-album, which had two extra songs on it.” 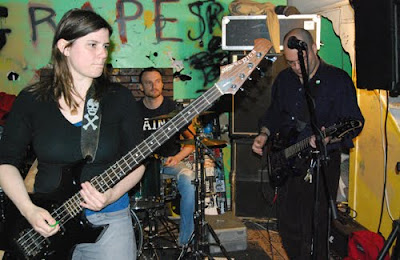 What Drugs of Faith slid in front of your greedy little faces courtesy of Selfmadegod should be no surprise to anyone who has followed the Virginia trio’s progression from the days of their self-titled mini-album and split with Antigama. Rather than a pure grindcore explosion, Corroded is tempered with punk rock riffing and crunchy crust collapses, which the band dubs grind’n’roll. I just call it fricken cool.
What Corroded really offers the discerning Drugs of Faith fan is more. More blasts, more grooves, more crust. Just more. Opener “Grayed Out” manages to work all of those disparate elements into one corrosive package of seething anger while “Foreign Climates” is all churning cumulonimbus glower. You can tap your toes along with the low gear grumble of “Checkers” while the 55 second “Hinges” is the song early His Hero is Gone just never got around to penning. One of the most striking aspects of how Johnson rolls his grind is the increased use of fairly discernable punk bark vocal style that lets you follow along without vainly poring over a lyric sheet trying to tie the screams to something discernable.
On “Race to the End” Johnson wails that “I don’t like where I’m going,” but Corroded should be fairly familiar terrain to the bands. Maybe just a new subdivision or two and a nice community park to spiff up the joint from their previous ventures. 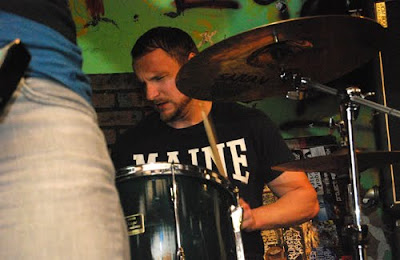 “We think there’s more range on this release than with our previous ones, and that’s partially the case because we had more breathing room for different songs on it,” Johnson said. “At a point during the writing process I realized I wanted to put more songs with blast beats on it, to make sure we had a balance—not too much mid-paced material to the detriment of the grind. One reviewer revealed to me that at first listen he didn’t like the record because it didn’t sound to him like the Drugs of Faith he knew. That surprised me.”
What’s not surprising is how good Corroded is.
Posted by Andrew Childers at 8:08 PM

I totally forgot that Richard Johnson was part of Drugs of Faith, a true grindcore veteran. Look forward to Corroded.

Nice work here. This album rules. I've been working on a review for way too long, trying to figure out why it rules so much. Not there yet. It just does.

Richard has always been a top-notch human and is a great supporter of all this scene for as long as I have known him, well over 12 years. Check out his "Disposable Underground" zine.

Did you really reference Huey Lewis? I guess I can't come up with anything better either. We both lose.

if it makes you feel better, think of it as less huey lewis and more patrick bateman.

That's the guy from "American Psycho", yes? If so, FUCK YES. Chrome chainsaw.