And bit by bit I add to this photo the new scenery I keep seeing, and finally in the photo I have people talking and singing and moving around, right? You know, I have them moving around. And then every time, you know, every time, it gets like this huge sort of palace, there’s this thing like a palace in my head, with lots of people getting together and doing lots of things.Then it’s really fun to finish this palace and look inside, just like looking down at earth from above the clouds, because there’s everything there, everything in the world. All kinds of people talking different languages, and the pillars in the palace are made in lots of different styles, and food from everywhere in the world is all laid out.It’s so much bigger and more detailed than something like a movie set. There’s all kinds of people, really all kinds of people. Blind men and beggars and cripples and clowns and dwarfs, cannibals and blacks in drag and prima donnas and matadors and body-builders, and nomads praying in the desert – they’re all there and doing something. And I watch them.The palace is always by the sea and it’s just beautiful, my palace is. 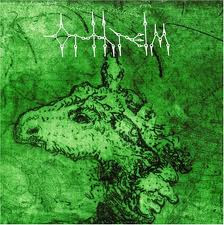 OrthrelmOVIpecac2005
Notions of being good, bad or merely intelligible as a musical experience become increasingly quaint and irrelevant as Orthrelm shred their way through all 45 minutes of OV, a single-song album that is less an expression of artistic invention than it is an instrumental decathlon that tests the limits of both performers' abilities and listeners' patience. And that comes from a band whose prior EP, Asristir Vieldriox, is a 13 minute, 99 song affair that makes Agoraphobic Nosebleed Hulk green with jealously.
Tech metal whatsis duo guitarist Mick Barr and drummer Josh Blair capture the space debris left orbiting the event horizon after Voivod slid into the greedy maw of the black hole. This is the nightmare lullaby that rocks blind idiot god Azazathoth to sleep as he gnaws on your sanity in the blasted gulfs between time and space.
Barr's bloody fingers shred out an endless parade of short, shrill riffs. He just finds a spot on the upper part of his fretboard and picks and prods at it, playing with riffs like a cat with cockroach until he's bored. Then he bounds off to another riff shape, mutating the music into strange new effigies. Behind him, Blair doesn't blast. Instead the iron-thewed percussionist keeps up nearly 45 minutes of continuous surf rock drum rolls that swell and crest underneath the maelstrom riffing, punctuating the mayhem. While Barr's performance is rightly the insane highlight of the whole affair, don't overlook Blair's contribution either.
Constructing OV must have been a studio nightmare, a logistic perdition, but the end result is the kind of album that puts smiles on the faces of people who think GridLink shreds too goddamned slow. OV is not an album I'm sure I enjoy as music (or if such a thing is even possible). However, it's something that, if you fancy extremity, must be experienced. The album's interior art features an insanely intricate hand-drawn maze. I couldn't think of a better metaphor for Orthrelm's music.
OV is available in its entirety on YouTube if you're up to the challenge.


Posted by Andrew Childers at 8:47 AM

Labels: blastbeat from the past, ipecac, orthrelm, ov, technical metal

Man I hate Mick Barr. 20mins in and its the same fucking drum pattern.

Mick Barr and Orthrelm have done some really cool stuff: like the LP they did on Three One G records. However this and the 99 song single-sided LP are my least favorite things they have done. I can't stand these albums interminable repetition.

i have an ... odd relationship with OV. again, i'm not sure i enjoy it, but every year or so i feel compelled to pit it on and let it wash over me.