G&P review: Looking For An Answer 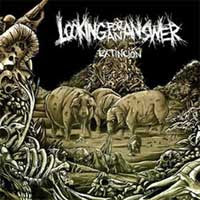 Looking for an Answer
Extincion
Living Dead Society
When punk and metal dip their toes into the political pool, they’re generally known for breeding some fairly extreme stances. And if we’re honest, some of the scene’s politics are hilariously questionable.
Take d-beat defenders Tragedy, who, while unarguably are one of the most dedicated and honest practitioners of a 30-year-old style that prizes integrity and DIY over the increasingly mainstream trappings of the current punk and metal business world, also tend to pop off at the mouth about the evils of technology and how it will strangle civilization and the planet. But somehow that ludditism doesn’t extend to electric guitars, recording studios, and CD pressing plants. Just sayin’.
Madrid’s Looking For and Answer, ideological kindred to Cattle Decapitation, suffer from the same conundrum with their “Animal Liberation, Human Extinction” motto. If you’re serious, I say extinction begins at home, so lead by example and step in front of a bus.
Luckily, these grindcore conquistadors, featuring members of Denak and Unsane Crisis, have yet to go gently into that good night, because their latest 29-minute platter of Terrorizer-basted bunny hugger metal is a meaty slab of medium rare grind.
Lopping off the obligatory intro/outro of squealing pigs being led to the slaughter, Looking for an Answer rage against the impending Perdición Mundial through 17 songs of breathless, rampaging, grindy goodness.
Though the obligatory high/low vocal interface comes into play, frontman Inaki is perfectly content to let his gut busting grunt do the talking for most of the album, holding the screech in reserve for highlights and texture. And just in case your Espanol no es bueno, LFAA conveniently provide English translations for the rest of us.
The title track’s bass heavy battery recalls the low end crunch of crusty grind forefathers Phobia while “Cada Nacimiento es una Tragedia” and “Ruptura” chug along like early Bolt Thrower on fast forward.
Mixing Carcass’ penchant for provocation, Cattle Decapitation’s ideology and Terrorizer’s execution, Looking for an Answer have pulled together a crisply produced package of grind that would slot neatly next to Insect Warfare or ASRA in any CD collection. And if you see them at a show, don’t invite them out for a burger.
Posted by Andrew Childers at 7:08 PM

Your comments on the contradictory nature of certain politcs troubled me. I'm not sure what kind of imagined purity you expect people to achieve in 2008 that would allow them to fully live their ideal political beliefs. To demand that how one lives absolutely match up with one's politics is to embrace cynicism and hopelessness. None of us are going to be able to find a position that would be entirely free of contradiction (tho' we should try, shouldn't we). Living in contradiction is no reason not to strive for something better and ask others to think about the world around them critically and thoughtfully. Just sayin, is all.

If you think about it, you'll have to agree that some other contradictions in "extreme music" are even harder to swallow... take for example PC bands who preach "tolerance", "anti-homophobia", "unity", and so on in their lyrics, and at the same time have songs called like "Emo Holocaust", "Emo death", "Poser Slaughter", etc.

dude, it was a joke. lighten up.