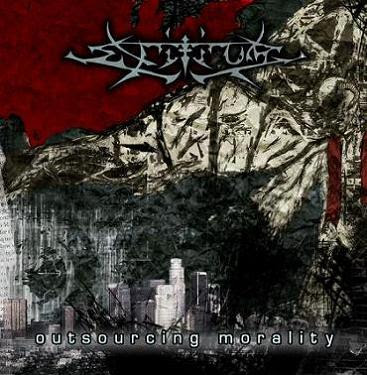 Exitium
Outsourcing Morality
Deepsend
2006
Imagine, if you can, a world where Dying Fetus’ John Gallagher could actually hold together a line up and deliver on all that band’s squandered potential, and instead of playing retread death metal, Gallagher and Co. poured all of that technical ferocity into two and three minute cluster bombs of death/grind. If you can picture that, you’ve got a pretty good idea of where Exitium are coming from.
Not to be confused with a pair of similarly named Scandinavian black metal bands, Texas/Oklahoma’s Exitium (formerly known as Diabolus Et Amicae) retain all the technical legerdemain of their deathly cousins – sweep picking, pinch harmonics, honest to Satan lead guitar, even the occasional tremolo dive bomb, but grafted on to a death/grind exoskeleton that huffs and churns along like the pissed off, anthropomorphic pile junk from Tetsuo the Iron Man. If the thought Decapitated decapitating Circle of Dead Children appeals to you, meet you new favorite band.
Though Outsourcing Morality can become a tad repetitive even at a slight 25 minutes long, guitarists Justin Jones and Kirk Kirkwood (who’s also responsible for the album art), frontload their sole album to date with the cream of their technical chops. The lead off title track and follow up “Enshrined” in particular deliver on every bit of songwriting chicanery the duo could commit to tape. On the vocal front Brandon Carrigan coughs up lung butter all over the mic, occasionally alternating his death gurgles with pig squeals.
Produced by Kill the Client’s James Delgado (whose cohort Champ Morgan grabs a guest mic spot) and mastered by Scott Hull, Outsourcing Morality throbs with a pleasantly unholy, subterranean malignance.
Since this came out in 2006, Exitium has undergone a massive lineup overhaul, with Kirkwood and bassist/new vocalist Andy Beard as the sole original members, recruiting Suture/Devourment drummer Erik Park to round out the trio. The band announced plans to record again in 2007 but so far nothing has been forthcoming. This is one to watch.
Posted by Andrew Childers at 6:34 PM

This is one of the best-sounding bad-sounding records I've ever heard. I thought the last Dying Fetus record was actually pretty good!

Great band. This was actually a demo recorded in 5 or 6 hours and later mastered and released as an 'album' by the band.
- james delgado

cool. thanks for that tidbit james. fucking hell of a demo then.
also, since you were cool enough to drop a comment, lemme just say ktc fucking slay and interviewing morgan a while back was an awesome experience.