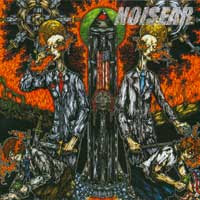 Noisear
Pyroclatic Annhiallation
RSR
Do metal people keep resumes? Can I call your former band for a recommendation before we bring you in full time?
The reason I ask is because Noisear’s latest album, Pyroclastic Annhiallation, released over the summer but recorded in 2007, boasts six (count ‘em six) seriously spot on Discordance Axis covers (like in a blind test I’d swear it was the real thing), and given drummer Bryan Fajardo’s collaboration with Jon Chang in GridLink, the temptation to read this is a job application is overwhelming. 2008 was a big year for Fajardo, who in addition to proving he can ably fill Dave Witte’s Adidases, also recorded with Kill the Client and anchored Phobia live.
In the midst of all that, almost overlooked (at least by me) was the fact that New Mexico’s finest grinders also put out a new album of their own. And you don’t need a handful of DxAx covers to figure out Noisear has collectively given Jouhou a spin or a thousand because they kick out their grind jams in the same, sleek Tokyo bullet train style. Alex Lucero has clearly put in post graduate work in the Jon Chang school of tonsil assault, ably mimicking the screech/growl tradeoffs that powered Discordance Axis.
But Noisear can’t be simply written off as mere plagiarists, or worse, a tribute band. “Myownworstenemy’s” guitar squalls and squeals hearken back to Witte’s pre-Axis collaborators, Human Remains while the awesomely titled “The Chains that Grind Us” slouch back toward Napalm Death. (Nonsensical word salad titles like “Endless Struggle with Invariable Imminence” and “Senselessly Torn Apart by the Corporate” are slightly more subtle Napalm references.)
So yeah Zmaj, this probably would have made my year end countdown had I gotten my shit together in time. And no, I have no clue what I would have cut either.
Posted by Andrew Childers at 8:31 PM

I really can't get enough of Fajardo's drumming. I especially love when he gets all spastic without slowing down!