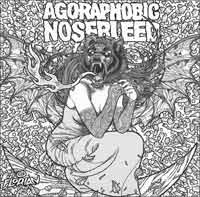 Agoraphobic Nosebleed/Insect Warfare
Split
Relapse
Nineteenth Century biologist Ernst Haeckel’s assertion that “ontogeny recapitulates phylogeny” during embryonic development certainly sounds intelligent and it’s a doozy to drop if you wanna bamboozle your friends with big words and your own purported genius. There’s just one problem: it’s bad science.
However, it does make a handy framework to describe the latest songs from sociopathic digigrinders Agoraphobic Nosebleed, whose four songs on this too short split are like rewinding the band’s evolution as they pontificate upon un-natural selection in the latest four track installment of their ongoing exploration of the “5 Band Genetic Equalizer.”
“Werewolf Women of the U.S.,” a skull-boring assault of noise lasting no longer than your average sneeze could have been one Altered States of America’s mindfuck interludes and makes a fine palette cleanser before “Dis-Order of the Species,” which finally harnesses the band’s latent Melvins influences, which came off as tedious on last year’s Apartment 213 split, without sacrificing the band’s underlying identity. Lead off song “Crypto-Zoology” and closer “Un-Natural Selection,” stop on a dime grinders, both could have fit snugly into any of the band’s output through Frozen Corpse Stuffed With Dope.
ANb have their groove back, so let’s hope they’re finally serious about that new full length they’ve been promising us for a year or more.
And if Nosebleed’s return to form weren’t reason enough for all those down in Whoville, the tall and the small, to rejoice, the posthumously prolific Insect Warfare chase their appearance on the Hull’s This Comp Kills Fascists and the latest Grind Bastards compilation (big, big hat tip to Scott Kincade for the hookup on that one) by out Nosebleeding Nosebleed with seven songs in a recockulously scant three minutes and change, the longest of which clocks in at a blink-and-you’ll-miss-it 40 seconds. This is Insect Warfare distilled to its absolute, ferocious, snarling, bug crushing essence. Not that there was much fat to pare down previously. Dobber must have replaced his arms with a pair of machine pistons because he inhumanly pounds his way through some of the fastest songs in IW’s already speeding ticket prone catalogue. Beau Beasley’s riff’s may not recapitulate phylogeny, but he sure as shit recapitulates the law of the saw, buzzing and hacking through the songs while Rahi shreds his vocal cords for your amusement.
Insect Warfare may be extinct for the time being, but I wouldn’t could one of evolution’s most successful and adaptable species out for eternity.
Posted by Andrew Childers at 6:49 PM

Rather cool site you've got here. Thanks for it. I like such themes and everything that is connected to them. I would like to read a bit more on that blog soon.