Blast(beat) From the Past: Vulgar Pigeons 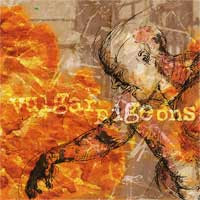 Vulgar Pigeons
Burning Episode
Deepsend
2004
I wish they call could be California... grind.
OK, lame, I know. But the Golden State may be known for surf, sun and silicon(e), and you’d never know it after listening to just about any grind disc out of L.A. Almost to a band (Terrorizer being an obvious exception), California grind is bass heavy, punked out and scummy as all hell. Bass typically gets short shrift in a scene more interested in speed than heft, but Excruciating Terror, Benumb, Phobia and Bloody Phoenix have all cherished their romance with the lower registers.
Born from Benumb (bassist Paul Pontikoff and drummer John Gotelli), Vulgar Pigeons carry over the same four string tom foolery from that band. And though the band’s debut, Summary Execution, has been swallowed by the memory hole that was the great Deathvomit catastrophuck, their vulgar disply of power Burning Episode is still readily available. Summary was a tad overlong and dragged in spots, but Burning Episode goes down smoother with a more varied songwriting repertoire crammed into 18 minutes.
Harking back to Phobia’s debut, Return to Desolation, Vulgar Pigeons don’t look askance as pushing grind’s notoriously short attention spans, pushing songs into the three, four, occasionally even five minute range in between 30 second blasters like “Coffin Honeymoon.” The Pigeons also aren’t afraid to monkey around with tempos as with the Anthrax mosh break of “Compartmentalize.”
If you, like me, have a Benumb fetish (and if you don’t, seriously, WTF?), Vulgar Pigeons should have pride of place in your collection.
Posted by Andrew Childers at 8:40 AM