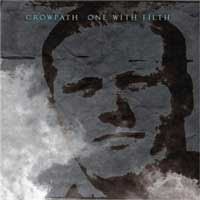 Crowpath
One With Filth
Willowtip
It helps to think of One With Filth as the soundtrack to a nonexistent Swedish slasher film, something like Henrik: Portrait of a Serial Killer. Crowpath’s latest longplayer is purported to be a concept album based on a notorious Swedish serial killer, a cop charged with investigating his own crimes.
Thanks to the helpful insistence of Shanetera and Zmaj, I finally filled a rather sizeable hole in my metal listening with Crowpath. Not that I have an excuse for tardiness because Willowtip has never sent me astray.
In between the grinding and the sludging, Crowpath set down spidery guitar work that almost reaches shred speeds when the band suddenly kicks the clutch and jumps from first to fifth gear.
The unexpected drone doom goodness of “Gryningen” boast guitars as heavy as swollen corpse and late album standout, the cacophonous “Cleansed in Chlorine whips like a tornado born of pestilential, subterranean winds, carrying aloft the whiff of discarded human remains. Closer “Retarded Angel” is the sonic equivalent of a house of mirrors, warping and stretching reality in a uniquely grotesque fashion.
My only complaint is One With Filth’s production is just as muted and gray as the album art, blunting the jagged and serrated edges that make the similarly sludgy Maruta or a previous album like Red on Chrome so pointed and enjoyable. But that’s a quibble because Crowpath manage to weld early Alice Cooper’s jaundiced eye for horror to white knuckled grind and sludge.
Posted by Andrew Childers at 6:49 PM

Labels: crowpath, grindcore, how swede it is, one with filth, power violence, reviews, sludge, willowtip

Wow, it took you this long to listen to Crowpath, yo should be ashamed. I'll post one of their diddys up just for you.

Thanks for the link and shoutout. I'm still stoked you like these guys enough to review them. You're so much more eloquent than me.

I've got the five inch record if you need to add it to your collection.

Another feature which the Gods offer as a clue is very foreboading and ominous. Mt. Zion is a mountain to the north of Diablo (the eye of The Beast) and one which has a working quarry at its base. Consistant with the decay we experience in society, Mt. Zion is being eaten away, slowly stripped of its resources, until one day paradise will be gone forever.

So many people don't care about global warming. They disregard the need for conservation and instead drive SUVs. They don't care about the Federal deficit/debt (outside of partisanship) and they don't care earning $400k for an $80,000/year job will eventually bankrupt the country. They have awarded themselves $400k pay and retirement packages, loading up their friends on the payroll during the boom 90s through the real estate bust while all services which the program were intended to fund now get cut to pay for it.
These people are often common public university labor. Not Ivy League, not private university.
This labor isn't good enough to command the salaries they are earning. And they understood this when they applied to the public university they settled on.
You can't expect a top-tier salary with a second-rate education.
They think they are going sometime during/at the end of this life, and disregard the poor souls who are left behind.
Sounds like the Italians who were used to plan World War II and the Holocaust, and not by accident.
These are the people who will be here in the United States when bankruptcy is declared and society deteriorates into chaos. And they will deserve the anarchy which ensues.

Continuing the push for privatization, reinforced and supported recently with enormous public sector salaries and retirement packages.
Once achieved the gods will utilize the corruptive predisposition of the private sector economy, as seen with the sub-prime/bailout fiasco, to initiate economic catastrophy and initiate the bankruptcy proceedings of the United States.
Whether the cure for cancer/diseases or the permanant resolution of economic misery, before the gods remove these motivations to pray we will experience an inordinate deluge of each element, with economic misery being perhaps the dissallusion of the united States with bankruptcy.

The gods used the Italians to ruin life in the 20th century.
The gods used the Italians to ruin life in A.D. with The Church.
The Church controlled Western Civilization. As the largest land owner in Europe they controlled the monarchies. They were responsbile for slavery, revenge for African invasion and rape of Italy. They created religious discontent, ultimately leading to the disfavored dumping ground known as the United States.
And each generation of these Italians were sold on "earning", only to be reincarnated as a lesser life form subsequently, punishment for their evil.
"The West Bank, where the end of the world will begin." With xtianity.

The gods are the commensurate rapist pathology, focussed on control. Be it animal migratory patterns, growth rates for plants and trees or human behavior::::The gods feel compelled to control these phenominah, whether it meets their strategy or not.
It is appropriate they picked the Italians for the downfall of man. The perception offered is exactly how the gods are. Unfortunate for the Italians, they were deliberately altered to match this pathology so the god's behavior could be justified in the context of the god's positioning.

The guy above me seems to have been off his meds and wrong about everything.