The Thing That Should Not Be: Carcass 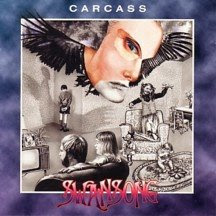 The band: To say you were there when a new musical movement gnawed its way out of the womb like a fetal zombie is a rare accomplishment, but Carcass can claim grindcore, death metal, melodic death and even death ‘n’ roll as progeny. The Liverpuddlians dropped five studio albums over their rather brief career, each an interesting, engaging evolutionary step beyond the previous. But then there was Swansong.

The album: Oh, the album we all love to hate. After Earache and Columbia’s abortive attempt to shove death metal into the mainstream, Swansong became the poster child for perceived efforts to neuter the music and make it more palatable to the MTV set.
Through no fault of his own, Carlo Regadas was no Michael Amott, and nothing he could do would ever win over disaffected fans, especially in the face of Swansong’s awful sounding guitars (though they are heavier than I remember, it’s not the overblown sound I associate with Carcass). Even Ken Owen’s drumming lost all of its verve here, becoming another stale, play-the-beat rock performance. “Corporeal Jigsore Quandray,” this ain’t.
But the largest disappoint, for me, is lyrical. Carcass was the only metal band to really revel in language. They had an almost Dead Kennedys kind of appreciation for witty word play, and Swansong unleashed enough bad puns to fill a respectable episode of Rocky and Bullwinkle. But a decade and a half later, sneering pop culture references to MTV’s lame Rock the Vote, bad Neil Young songs and the marketing phenomenon formerly known as Generation X just come off as incredibly dated and irrelevant.

The verdict: As the recent reunion attests, Swansong was probably not the way Carcass wanted to go out, but with a few years’ perspective, I can see some of the death ‘n’ rollers giving this a second, more charitable listen. But since Heartwork tries my patience these days, I’ll just give Reek of Putrefaction and Symphonies of Sickness another spin.
Posted by Andrew Childers at 8:09 PM

Labels: carcass, death metal, england, grindcore, swansong, the thing that should not be