The Thing That Should Not Be: Terrorizer 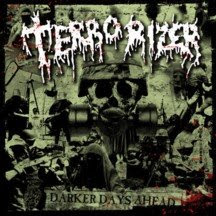 The band: Maybe it’s just me, but bands that came, kicked ass and left only one album to mark their passing have a sort of mythic status in my mind, but give Repulsion credit for dining out on one shot of brilliance for 20 years without sullying their rep with poorly conceived new material. Even Mike Amott had the good sense to rename the band Arch Enemy when he decided to reform Carnage post-Carcass. I can think of no better cautionary tale of that than L.A.’s legendary Terrorizer who recorded one posthumous (at the time) album before Jesse Pintado joined the formidable Napalm Death Mark 3 and drummer Pete Sandoval was absorbed into Morbid Angel. World Downfall was a revelation: a death metal/punk hybrid and proof that the limeys hadn’t cornered the market on grind. So why did the band have to go fuck it all up two decades later?

The album: Insert your preferred cliché about assaulting confined aquatic wildlife with high caliber firepower here, but Darker Days Ahead disappointed me. It needed to be said.
His drinking becoming a liability (Mitch Harris has said Pintado couldn’t even get his shit together to play a note on either of his last two albums with Napalm Death), Pintado decided to reform Terrorizer and party like it was 1989. And while not bad for a grind album, Darker Days Ahead was just terrible for a Terrorizer album.
Darker Days Ahead, indeed; weeks after its release, Pintado would be dead.
Was there something wrong with the original “Dead Shall Rise” that necessitated an update damn near 20 years after the fact? Pintado obviously thought so, so in 2006 he rounded up half of Terrorizer and farted out a lame redo that served only to soon part fools (like me) and their money.
Scratch the intro, outro and re-recorded versions of demo and World Downfall tracks and you’re left with a whopping eight songs of midgrade grind. The riffs are passable and I’ve always been a fan of Anthony Rezhawk’s brutal yet intelligible vocal delivery, but what passed for Terrorizer in 2006 was a flat, overproduced shadow of its former self. Sandoval may be one of the greatest drummers to ever sit on a stool, but his playing on Darker Days Ahead is absolutely inexcusable: a clicking typewriter of poorly produced, triggered drumming.
Which is a shame, because with better production (and under any name but Terrorizer), Darker Days Ahead may have been a passable affair. “Fall Out” and “Mayhem” aren’t bad songs; they just can’t live up to World Downfall’s legacy.

The verdict: There’s a reason a Japanese grind band named itself World Downfall and not Darker Days Ahead. Skip this; download this or buy this instead.
Posted by Andrew Childers at 7:47 PM

Labels: darker days ahead, grindcore, terrorizer, the thing that should not be, united states

I'm not sure about the Japanese one, but there's a pretty decent German grind band called World Downfall. One can download their albums from their site.