You Grind…But Why?: Suffering Mind

Suffering Mind guitarist Kuchar is the very reason I started asking this question of people. So thanks for the inspiration, Kuchar. See, last year I interviewed the Polish band, and being a smartass, I thought I’d open the conversation by asking him, “You suffer…but why?” I thought, given the band’s name, it would make an amusing interlude to hang a story on. But he took my question seriously, and that planted the germ of the idea in my head. So what makes him get his grind on? 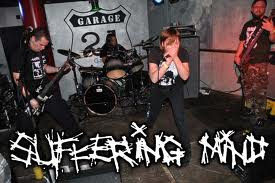 “I was a young guy that started to explore more brutal genres in punk. I started to listen crust and grindcore,” he said. “I’m not sure which album was my first grindcore one, but I remember that Razor Sharp Daggers made by Agathocles was first one that makes me wanted to listen to it whole day.”

Kuchar went on to explain how grindcore eventually brought Suffering Mind together.

“Our previous band called People Hate (playing grindcore) had just split up and three of five members of the band decided to continue playing together,” he said. “We asked Ulka (vocalist) to join us for a sludge punk project influenced by Dystopia. After a few practices we decided to continue playing grindcore - and that was the birth of Suffering Mind. We decided in that moment that grindcore is the most comfortable genre for us. It's because we listen to many other grindcore bands and when we were making grindcore songs we had the feeling that they are much better than those sludge punk ones. When you do something good enough to feel satisfaction with that fact, it's just all you need at the moment, I guess. So we don't wonder now why we play grindcore. We just love to do that and we are very satisfied with playing, recording and releasing our stuff.”

Posted by Andrew Childers at 7:55 AM

Labels: grindcore, interviews, poland, suffering mind, you grind but why

What the fuck is grindcore? this all sounds like noise.

Take a look at his blog. Hilarious!

i couldn't get past his profile saying "radiohead and anything pitchfork." i can't look further because if that's not deadpan sarcasm, the world is fucked.

No question it's a joke. I kind of love it.

i'm hoping it is. is there some variation on poe's law for whiny self-entitled teen blogs? cuz i know some people who would write that with a straight face.

Imagine having never heard a blast beat. He came to the right place!

i like suffering mind and i like this segment. skip the foreplay and get to the meat.

p.s.
Seems like a very modest summer for the blues; hopefully those ex-devils will be of some help.I have big hopes for Shattenkirk and Halak this season, but what were they thinking w. Cheechoo?

they were thinking cheechoo is gonna be a role player down in peoria. his contract is so small it costs them nothing.if he somehow rebounds, they look like geniuses.

Backes was on my fantasy team, love that guy+ that type of player.

Good to know about choochoo

What is ulak last name please tell me