You Grind...But Why?: Population Reduction

The time has come to wind this series down for at least a little bit, and I can think of no better way to send it in to the great beyond than with one of the smartest guys to ever play retarded metal.

Everybody's got "that album." That one that you blew off for a number of years but would eventually totally change the course of your musical life. Mine was Repulsion. I was completely late to the Horrified party, blowing it off as just another lame gore record (despite being all about Reek of Putrefaction, figure that one out). It was discovering "that album" that set Justin "Dr. X" Green on the true path of grind, culminating in thrashazoid weirdos Population Reduction. 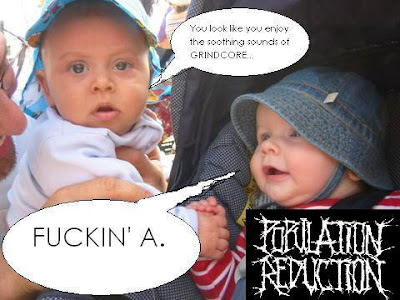 "I got into grind from the death metal side of things as opposed to the punk side," Green said. "I had been into death metal for years and was looking for something different around 1997/1998, when death metal was starting to be all about ultra-technicality and sterility. My favorite death metal bands were more in the early Entombed/Autopsy vein, and I wasn't hearing that sound in the death metal scene anymore. I knew what I was looking for, but I didn't know what it was called- I even asked this one punk kid in my high school, 'Is there a death metal band that kinda plays like Helmet, with no solos and just riffs?', and he replied, 'I dunno... maybe Terrorizer?' I saw the CD at a record store but didn't buy it because Pete Sandoval's hair was too big on the back photo and I thought it was going to be Thrash. (!!) When I heard that Terrorizer record years later, I knew that was the exact sound that I'd been looking for. Stripped down, fast, tight, and with really catchy, memorable riffs. I still wonder how my life would have been different if I'd bought that record at age 16 instead of 22. I would have gotten into punk a lot sooner for sure. What I figured out years later was that my favorite death metal bands were the ones that had the most punk influences, so when I started listening to the more punk-influenced grind, everything just set into place for me.
"To me, grind is like death metal with all the fat trimmed off. It was kind of like taking the best parts (mosh parts, blast beats, thrash beats, d-beats) of my favorite death metal songs and putting them all in the same short song. When you're playing a 5-minute-plus death metal song, it's ok to have longer transitional passages or put in some filler-type riffs here or there, but with grind you have to get the most out of every riff in the shortest amount of time. Instead of writing one good riff and then thinking, 'Ok, I'll build the song around that', you have to think, 'Ok, I've got one good riff. Now I need about 3 more really awesome riffs and I'll start arranging the song.' Grind to me is 'more killer, less filler.'
"Also, when I started getting into grind and then crust I really appreciated the difference in lyrical content. I'd never really been 'politically active' but had a lot of very strong opinions about things, and was always really let down by the sexism and the posturing of the metal scene, and the sort of 'jock' attitudes and lack of intelligence that I saw. With grind and crust there were finally some bands that were saying things about the world I actually agreed with. When I read the lyrics to Dystopia's Human=Garbage record I knew I had found a scene with kindred spirits!
"In addition to playing drums, I also play guitar, but I'm not great. I can't solo and never have had any interest, which is probably why grindcore appealed to me so much. It's death metal played by punks! And everyone knows that punks don't take guitar lessons... so basically I realized I could continue to write grind riffs for all eternity with the fairly limited guitar vocabulary that I have, and that's what I've been doing."
Posted by Andrew Childers at 6:53 PM

Labels: interviews, population reduction, you grind but why

Shit. This response was awesome, too. I can only hope Dr. X will go on to bigger and faster things.

justin said he's getting a new autopsy style band going while the guitarist is still active in voetsek.