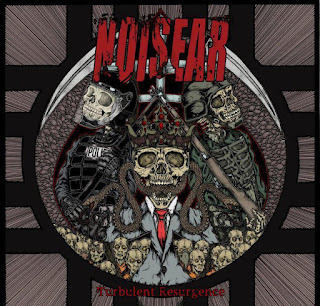 Noisear
Turbulent Resurgence
Willowtip
The first and most important thing to know about Turbulent Resurgence: there is absolutely nothing even vaguely resembling “Noisearuption” to be found here. Sure, you have to sit through totally disposable intro/outro/intermission tracks, but they’re all a minute long and easily skippable. Other than that, Noisear don’t really deviate an iota from their wonted M.O.  Dorian Rainwater’s elastic riffs get twisted and mobiused around Bryan Fajardo’s Swiss watch-precision drumming. The Noisear formula is pretty familiar and settled at this point: Human Remains’ weirdest noises, slick Discordance Axis aggression, shards of Mortalized’s extra digit guitar wizardry, head-scratching Gorguts excursions and just a soupcon of James Plotkin’s most outré grind experiments get pureed and synthesized into a smooth shelled sonic suppository.
While the results are familiar, Turbulent Resurgence is still a bit of a mixed bag. Tipping the positive side of the ledger, the album is a lean 18 minutes, making it Noisear’s tightest, most compact offering in quite a bit. It’s a refreshing change from the overlong (not even counting “Noisearuption” on Subvert the Dominant Paradigm). However, Turbulent Resurgence is also lacking the latter’s dervish frenzy as well. The production is flatter and more to the point, as are most of the songs. That means there are fewer dizzying heights and murky lows to be found. Instead, Turbulent Resurgence finds Noisear grinding along at a (relatively speaking, this is Noisear, after all) even keel.
None of that is to say Turbulent Resurgence is a disappointment. For long time Noisear fiends, the latest record will excite all the appropriate cortical nodes. For newcomers, the leaner running time is the perfect entry into the band’s extradimensional aspirations. While casual grind fans will probably enjoy this one just fine, your serious blastbeat junky might walk away hoping for just a little bit more.

[Full disclosure: Willowtip sent me a download.]
Posted by Andrew Childers at 6:49 PM

would love to hear more tracks like murderous. if they knocked off 3 mintues this album would be near perfect for me.

Actually, I'm cool with the noise bursts on this one. I sat through "Noisearuption" twice, just to make sure it wasn't my bag. It wasn't.

However, I can take that stuff as sort of ear-bleach between songs. The riffs seemed thrashier this time, which is usually a pretty good way to get me tumescent.

i used to think noisear's "we wrote and recorded our album in a weekend" thing was cool, but now i'm starting to wish maybe they spent an extra day at least editing. still a cool album, but i just don't think they're breaking any new ground and i know damn well they have the talent to do it.