The Thing That Should Not Be: Napalm Death

Because I am a complete fucking masochist, I have been repeatedly subjecting myself to some of the worst albums some of the most foundational grind bands ever shat into existence lately, torturing my innocent ears to decide if there are any redeeming qualities to be found.

The band: Oh sure Siege, Repulsion and Cryptic Slaughter 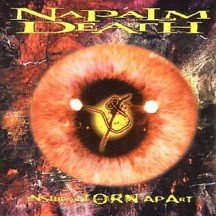 were all dabbling in grind’s then-unnamed primordial ooze before Napalm Death came along, but it wasn’t until the Birmingham bangers that anybody put the whole package together and, through some canny marketing, injected the terms grindcore and blast beat into the modern lexicon. But just because you laid a corner stone for a new musical movement doesn’t mean I’ll excuse truly awful singing and lazy, disinterested song writing.

The album: Is Barney in the band? Is Barney out of the band? The title of 1997’s Inside the Torn Apart can be read pretty literally because Napalm Death seemed like it might be on the verge of imploding after frontman Mark Greenway left/was fired from the band and lit out for the greener pastures of Extreme Noise Terror. Once he was coaxed back in the fold, the band unleashed what has to be the worst album in their storied career. Even Colin Richardson’s production was monochromatic and enervated, sapping the effort of any emotion.
I don’t begrudge anybody their experimentation, but Inside the Torn Apart was the unthinkable: a Napalm Death album almost devoid of blast beats or any semblance of their grind glory days. Instead it was a flaccid, murky combination of hardcore and meandering metal that just never seemed to click. Oh sure, it started off strong enough. “Breed to Breathe” is a fairly rocking tune if you dig Diatribes and “Greed Killing,” but things quickly soured over the remaining half an hour or so. Whatever sick bastard brain farted the idea of clean vocals on the title track should be dragged out behind the remains of the Mermaid and beaten senseless by rude boys. This is Napalm Death at an absolute low point, though, incongruously, the song “Lowpoint” is the tune on Torn Apart to feature blast beats and some semblance of grind. “Prelude” is also another rare bright spot, a d-beat (briefly blasted) assault that could have graced Mentally Murdered.
Though I kept buying all of Napalm’s albums (and I admit a certain sentimental affection for later work like Words From the Exit Wound), this was an era when, if we’re honest, we admit probably most of us just stopped caring about Napalm Death. Luckily, a clean break from Earache a few years later a steel toed boot up the ass from a certain Swedish grind collective played Jesus to Napalm’s moribund Lazarus.

The verdict: There are plenty of bands that could have harnessed that internal tension to unleash an ass whupping album, but Napalm Death isn’t one of them. Instead, the band thrives when its internal harmony remains uncorrupted. If you need further proof, drop the needle on any post-Pintado album.
Posted by Andrew Childers at 8:21 PM

Labels: england, grindcore, inside the torn apart, napalm death, the thing that should not be

Just have to say I disagree. I know it's not really a grind record per se, but I enjoy the living shit out of this one. It's not exactly Scum, but I've listened to this one enough to where it's worked its way into my brain.

Personally, I'll take it over the stale pseudo-Florida Death of Harmony Corruption any day.

Did you just use a Metallica reference for Napalm Death? What the fuck.

This post succeeded in making me curious about this and their other albums from the 90's. I hope it's temporary. Anyway, great blog!

don't worry shane, it's not just napalm. i've got at least two more of these sitting in the can for the next couple of weeks.
and lee, i'll certainly agree scott burns totally fubared the production on harmony. as a wise friend of mine told me many moons ago, he'd go to stores looking for albums produced by burns just for the satisfaction of not buying them.

i can't wait to hear what you think of the new record.