Blast(beat) from the Past: Luddite Clone 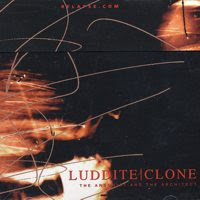 Luddite Clone
The Arsonist and the Architect
Cyberdine 243/Relapse
2000
Shortly after bargain basement Frankenstein Dr. Weird unleashed anthropomorphic fast food on New Jersey, he moved on to his next project: a cutting edge metallic hardcore band cobbled together from leftover pieces of Human Remains, Creation is Crucifixion and Unruh, creating a post-singularity robot fighting league killbot. Like those contemporaries (as well as Burnt by the Sun with whom they shared a split), Luddite Clone packed grind intensity, death metal heft and hardcore passion into one package long before all that shit became a tiresome cliché. Like those other bands, Luddite Clone never skimped on the technical prowess, particularly unsung secret weapon Kevin Hannum whose tortuous, jazz-speckled bass brings both depth focus to the band.
“Oratory of a Jigsaw” is Dark City-sampling machine shop full of power drills riffs boring through your skull to excoriate the sweetmeats beyond while frontman Andy Cummings does his spittle-flecked R. Lee Ermey impersonation over your shoulder. And the other five songs are just as composed and powerful. “Circle Template” hovers and pecks like the marauding seagulls from The Birds, Andrew Shearer and Ian Berkowitz’s guitars crest against the whitewater tug of Bob Raf’s drums on “Arthropod” and “The Contortionist” wracks bone and tendon like David Blaine against a backdrop of Hannum’s bebop bass and record scratch breakdowns.
This was an EP so good Relapse immediate snapped it up and widely reissued it. Unfortunately, Luddite Clone flared like a supernova in 2000, issuing both The Arsonist and the Architect and their split with Burnt by the Sun. But like a solar implosion, the band quickly fizzled. A split live album with The Esoteric (the ex-Coalesce one not the doom one), chronicling Luddite Clone’s final show at CBGB’s, was the band’s epitaph in 2001.
Posted by Andrew Childers at 6:42 PM

Labels: blastbeat from the past, cyberdine243, grindcore, hardcore, luddite clone, relapse, the arsonist and the architect, united states

In the movie, we learn that Frylock made Dr Weird. Nitpicking aside, I've never heard this album. Sounds interesting. Now to see if the music can live up to the imagry you ascribe it.

That was a a promising band. They were quite young (19/20)/ Too funny to read. I have been friends with Andy since that time period and to this day. You've gone way back in the "way back machine" for this one, Herr Childers. Break off bands included Kiss the Cynic, and Zookeeper (Bob Raf). I don't think Zookeeper did anything much beyond naming the project. Kiss the Cynic made some t-shirts and an EP. Some members from there went on to form Hail and Fire. Good times, good people.

206: oh, you pickers of nits with your "facts" and "truth" and "things that could be easily verified before posting to the interwebs."
i'm more of a harvey birdman type anyway.

scott: now, now. don't get ahead of me here. i got more coming.

I am the knight who picks nits.

Great band, awesome disc. Wish we could have released more music by them.

I can't believe this was over 10 years ago and there is still some interest in this project. The only band we were influenced by of the three mentioned in this review was Human Remains who were basically part of the same scene we were starting from. A lot of these songs were written 2 to 3 years earlier for a different band me and Ian were in. I don't even know if Creation is Crucifixion or Unruh (never listened to either of them) were even around back then, but we were more into hip hop and standard "tough guy" hardcore than anything else. Me and Ian really thought we invented this kind of music, and that a lot of the bands who came out after us with this "sound" were kind of geeky. Anyway, thanks for putting up this post, it brought back a lot of memories, and I'll make sure Andy gets to see it.

Creation is Crucifixion was around and Paul was a good friend of mine, we had a number of long chats about similar ideals and tastes, so i can imagine rubbing off could happen somehow, but it would be unintentional. ian learned a bunch of guitar from Paul when he was in a band called Abnegation before CIC so there could be that connection as well, but a lot of LC was bob's crazy musical tastes and abilities. bob drove that band musically and had like minded talents around him. i was along for the ride an aesthetic. ;) miss you fuckers.