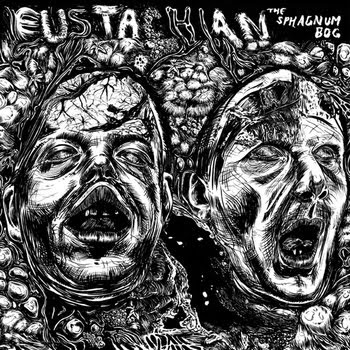 Eustachian
The Sphagnum Bog
Grindcore Karaoke
The next time your ears pop on a plane, thank your Eustachian tubes for maintaining the pressure equilibrium in your ears. I wish Los Angeles/Antwerp duo Eustachian had just a tad more equilibrium between their grindcore lashings and their electronic adventurism. I wanted to like The Sphagnum Bog more than I did because Eustachian have a deft hand with each, but unlike my chocolate and my peanut butter, I’m just not enjoying them together. But I guess you have to make allowances for an album named after named after peat moss.
When Eustachian hit, they know how to furrow deep down into your lizard brain’s fight or flight functions. Opener “Martinique” sounds like a light saber duel performed by a sheet metal orchestra and clear album standout “Trichopatho Skeleton” sets an exemplary Metallica/NWOBHM riff up against electronically-augmented grindcore corkscrewing. At nearly three and a half minutes, “Martinique II” lounges around a bit more than its otherwise excellent Gigantic Brain-style psychotrip deserves.
And that’s my biggest problem with The Sphagnum Bog. Too many of these songs linger longer than necessary. Tighter songs like the relatively concise “Z,” which tips the scales at 1:46, bear up better under repeated listens, but many of the other moments feel crushed under Eustachian’s everything but the master mixing board approach to songwriting.
Boasting one thoroughly excellent song and a host of other more soundscape-oriented assaults that pay off to a lesser degree, this one is an acquired taste.
Posted by Andrew Childers at 8:09 PM

I would've flipped out about this in high school [via sounding just like Genghis Tron]. Now... meh.

Actually I liked it a lot, but yes- an acquired taste for sure!